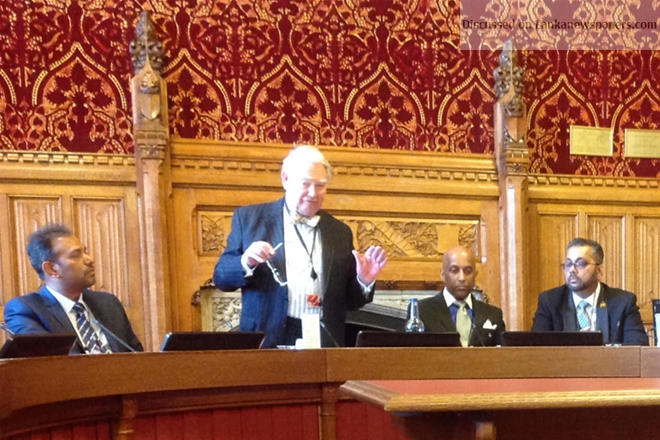 Mr Goonawardena, in his warm introductory speech, expressed gratitude to the Right Honourable Lord Naseby who hosted this historic event, and he in turn was warmly welcomed by Global Sri Lankan Forum UK. The event was graced by the presence of key stakeholders in the Sri Lankan diaspora in the UK, including Mr Prasanga Jayamanna (President, Global Sri Lankan Forum UK), representatives from various organizations in UK, academics along with patriotic UK Sri Lankans (with the blessings from Ven Wanduraba Kassapa Thero, Ven.Borelle Athula Thero), and GSLF UK officials.

In his opening remarks, Mr Goonawardena mentioned that the unitary of Sri Lanka is paramount. Sri Lanka is a very progressive society, as shown by their national flag (adopted in 1950), which represents the three major communities on the island: the Singhalese by the lion, the orange for Tamil, and the green for Muslims.

Mr Goonawardena observed that we all have to counter the misinformation being broadcast by separatist politically-motivated groups against Sri Lanka. Let it be said, he added, that as everybody is well aware, covert racism is widespread in the United Kingdom and elsewhere in Europe against foreign ethnic groups.

In Sri Lanka we have integrated ethnic groups into the fabric of our society, whereby they can achieve the highest levels of office, be it in the judiciary, parliament, the armed forces and the list goes on, but it cannot be said that it happens in Europe to the same high degree.

Other notable speakers at the event included the Secretary of the Global Sri Lankan Forum UK, Mr Jayaraj Palihawadana.

A brief overview and introduction was provided by Mr Goonawardena on GSLF UK, with members all over the world, including not limited to Australia, New Zeeland, Canada, the United Kingdom, France, Italy, UAE, Sweden, Poland, Kuwait, Israel and Switzerland. The GSLF has:

Vision: – No political affiliation but is an umbrella organization of Sri Lankans domiciled abroad, established with the objective to work hard for the preservation of the unitary status of the country, with no separatist ideologies.

Mission:- Building and sustain an ideological, cultural and legislative environment that would recognize and promote unitary Sri Lanka, with no separatist ideologies. To counter the negative narrative propaganda, and exert political influence.

The Global Sri Lankan Forum is a group of Sri Lankan expatriates which wants to safeguard and support the unitary status of the Island. Descendants from Sri Lanka are scattered around the world; with a centralized movement, we hope to connect Sri Lankans who have an interest in the Island. There are representatives from many countries taking part, and forming a collective voice towards issues pertaining to Sri Lanka.

What we do:- We engage with political parties at all levels with our national interest. Duty of safeguarding the interests of the Sri Lankan defence personnel, who fought during the conflict in the country, is one of our objectives.

Mr Jayaraj Palihawadana (Secretary, Global Sri Lankan Forum UK), mentioned their initial working group meeting at the House of Lords with the Admiral Sarath Weerasekara, Lord Naseby and eminent persons. Which was a resounding success on the 8th February 2018 at the House of Lords. It was followed by an evening reception with guests from 16 countries, the representatives of the Global Sri Lankan diaspora.

Mr Palihawadana (Secretary of the Global Sri Lankan Forum UK) informed the audience of the work conducted since the meeting on 8thFebruary, and the progress made at the subsequent 37th UNHRC Session in Geneva. He stated that the GSLF attend the Human Rights Council (HRC) sessions in Geneva three times a year. GSLF presence in the HRC commenced in March 2017 and prior to that, Geneva was very little known to patriotic originations in Sri Lanka.

Thanks to the courtesy of Ven.Kassapa Thera, the chief incumbent of the Birmingham Maha Viharya in UK, GSLF have been given an opportunity to have access to NGOs at the HRC. GSLF started with three speeches during the first session and one year later (March 2018), GSLF could deliver nearly 20 speeches and had three side events. He further stated that in the course of the organization of this the 37th session of the Geneva Human Rights Council (HRC) in Geneva, the Global Sri Lankan Forum, the issues discussed during the previous meeting were of great help. He further stated that the organization have successfully carried out a petition, which was handed to 10 Downing Street.

In 2015, during the HRC sessions in Geneva, a resolution passed against Sri Lanka on the establishment of a hybrid special court to try war crimes, and crimes against humanity allegedly committed by all parties to the armed conflict.

The said resolution was based on the findings of The Office of the High Commissioner for Human Rights (United Nations) OHCHR investigation on Sri Lanka, a special team established by former High Commissioner. Furthermore, the investigation was based on the information available to the team at that time, and had no access to the conflict zone nor even to the country, so the information available via third party media reports made for ‘fake news’.

Therefore, we believe the investigation failed to establish the facts of the conflict, and had incorrect information, fact and figures about the last phase of the war. Most of the real facts and evidence, especially the communications between foreign missions and their respective countries, was hidden under the guise of the security concerns and diplomatic relationships.

However, by the continuous effort by various organizations and individuals, especially by Lord Naseby, they were able to uncover hard evidence. Recently Lord Naseby was able to disclose copies of 39 pages of dispatches sent by UK Defence Attaché to UK Foreign Office for the period of January to May 2009. It took him from November 2014 until 2017 to extract them, which was heavily redacted by the UK Government. In the light of above evidence and others available so far, that the claim of 40,000 civilians killed between January 1st and May 18th 2009 is totally erroneous, stated Mr Palihawadana.

During the meeting on February 8, Mr. Yasas Dharmadasa , Secretary of the GSLF from United Arab Emirates branch stated to Lord Naseby that there is further evidence to support (even from the sources supportive LTTE) this erroneous claim of 40,000 deaths. The evidence to prove these facts could be obtained through the sources they ca access and will submit a full investigation report. Accordingly, the United Arab Emirates branch of the GSLF conducted a full survey and prepared a comprehensive report, which was handed over to the Lord Naseby by the President of the GSLF UK, Mr Prasanga Jayamanne.

Recognizing that, Lord Naseby has stated that the GSLF is playing a very important role in preparing this report and using these reports for his future efforts. He further said he would address the House of Lords once again regarding the same issue, hopefully before March 2019. He further stated that the evidence contained in this report will be used in his future efforts.

The Chair Mr Goonawardena stated “We all know that Rt. Hon. Lord Naseby, in his very comprehensive opening speech before the House of Lords, called for to an end war crime allegation against Sri Lanka. He did not stop there, and he wrote to the Human Rights Council and UN, still continuing his efforts, giving us the advice.”

The keynote speaker for the event was Lord Naseby. Addressing the gathering, Lord Naseby stated that the progress achieved by the Global Sri Lankan Forum.