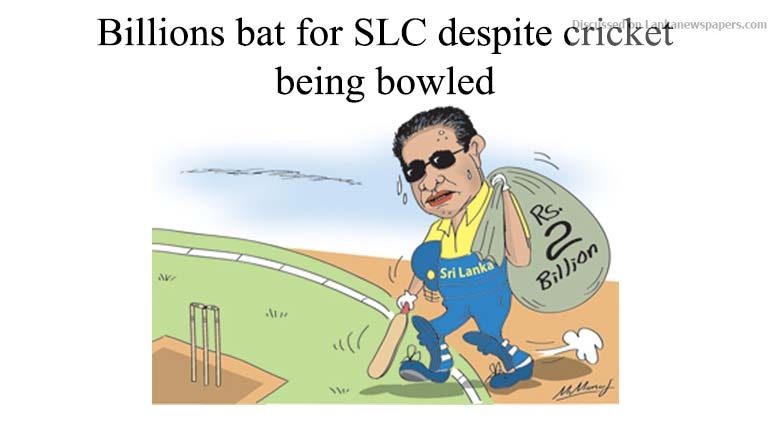 The national cricket team might have had bad luck in 2017 but the sport’s governing body has recorded healthy financial growth with a massive increase in profits and a sizable reduction in liabilities, its audited accounts show.

Sri Lanka Cricket (SLC) began the year on a positive outlook, recording a Rs 63mn surplus in 2016. This has improved dramatically during the succeeding financial year (2017-18) with profits soaring over Rs 2bn.

The Sunday Times obtained a copy of the accounts after it was tabled at Wednesday’s Executive Committee meeting. The report signed by Auditor General HM Gamini Wijesinghe was issued on April 20, 2018.

Cricket–one of the country’s biggest brands–embarrassingly fell from grace, with losing became more of a habit than a rarity. Sri Lanka notched three 5-0 ODI losses in 2017 against South Africa, India and Pakistan. They also conceded a ODI series 2-3 to Zimbabwe and a Test defeat to Bangladesh. But SLC has turned around its financial position from near meltdown.

As at December 31, 2017, the board’s net profits stood at Rs 2.13bn compared with Rs 63mn recorded during the 2016 financial cycle. This financial growth is significant, given that SLC was in the doldrums after having spent billions on extravagant infrastructure development ahead of the 2011 Cricket World Cup, which the country co-hosted with India and Bangladesh.

The audited accounts, to be presented to the membership at the forthcoming Annual General Meeting, will also show substantial decrease in liabilities. They now stand at Rs 1.16bn, a reduction of Rs 226mn when compared with the 2016 financial year (when they were Rs 1.39bn).

SLC has doubled its income through international cricket during the year under review. They recorded Rs 4.06bn from international tours, a significant increase when compared with the previous year where turnover was just Rs 920mn.

Sri Lanka had a heavy international calendar in 2017. The South Africa tour in late December 2016 was followed by a three-match T20 series in Australia. Then came the visit of Bangladesh; the Champions Trophy in England; Zimbabwe tour of Sri Lanka; India’s visit; a series in UAE with Pakistan; and a full tour of India.

Each tour gave a boost to SLC’s financial position but the India visit was the biggest money spinner, followed by the Champions Trophy.

SLC’s income from marketing and corporate communications has shown a slight improvement with a Rs 72mn increase. The total income generated through national team sponsorships, domestic cricket and other sponsorships stands at Rs 473mn. Their revenue also got a boost of Rs 57mn through various means like interest income on short-term investments, etc. Accordingly, the board’s gross income for the year was a staggering Rs 6.19bn, nearly double of it achieved in the 2016 cycle (when it was Rs 3.24bn).

The board’s total expenditure has also gone up by around Rs 1bn–Rs 4.06bn in 2017, compared with Rs 3.17bn the previous year. The highest outlay was on international cricket: tours; other expenses of the national team; A team tours, junior team tours; and national women’s team tours. The total cost was Rs 1.67bn.

The accounts reveal that SLC has doubled expenditure on women’s cricket, even though the product failed to bear fruit that year. Accordingly, Rs 114mn was pumped into women’s cricket over Rs 57mn spent in 2016. The board’s administrative and other expenses also saw a sizeable rise: Rs 854mn when compared with Rs 630mn in 2016.

The board also invested on domestic cricket. Overall it spent Rs 575mn–Rs 111mn more than the previous year. With the local domestic cricket tournament being heavily criticised for its lack of quality, the board kick-started a provincial tournament last year. This has almost doubled their expenses on local tournaments to Rs 464mn.

Expenditure on infrastructure development, too, went up. The board spent Rs 284mn on development of stadiums, school cricket and other administrative grants over a mere Rs 42mn in 2016. This obsessive expenditure on infra-structure development received much criticism from various quarters as it has given rise to several allegations of corruption. As recently as last week, a local politicians questions a dubious transaction amounting Rs. 25mn given a high priest in Kandy as part payment to obtain land to construct a cricket campus in the hill country.

SLC has moderately raised its expenditure on school cricket, the cradle of the game, after making a sharp cut the previous year. In 2015, SLC deployed Rs 34mn on the sector but whittled it down to just Rs 10mn in 2016. Last year, the board injected an additional Rs 5mn for the same purpose.

Meanwhile, the report highlights several accounting deficiencies, mainly a sum of Rs 2.21bn to be paid to the Sri Lanka Ports Authority for the construction of Hambantota cricket grounds shown under ‘other venue creditors’; an advance payment of Rs 19mn made in respect of construction and improvement of grounds; a sum of Rs 58mn given to cricket associations’ tournaments; and an unrealised receivable sponsorship of Rs. 13mn.