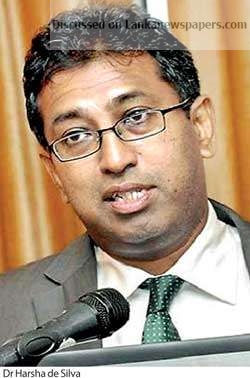 State Minister of National Policies and Economic Affairs Dr. Harsha de Silva yesterday ruled out the possibility of introducing measures to contain the devaluation of the rupee, in the wake of the local currency hitting record lows against the U.S. dollar.
Dr.de Silva said the government’s policy was to increase exports and encourage local industrialists and not to politicize financial markets.  “We maintain a floating exchange rate system at the moment. The rupee fluctuates in such a context. Sometimes politicians try to control the rupee for vested interests. This was done in Sri Lanka in 2011. We lost US $ 4.2 billion during that year. Can you call it a success?
We lost half of our foreign reserves in 2011 and the rupee further devalued. The same thing happened in 2015 and we lost US $ 800 million. Controlling the rupee is not a permanent solution,” the State Minister stressed.
At the same time, Dr.de Silva said Sri Lanka’s foreign reserves are sufficient if the Central Bank opts to apply control measures.
“Sri Lanka’s foreign reserves are sufficient if we want to control the rupee. Sri Lanka’s foreign reserves have exceeded US $ 10 billion at the moment. However the government’s policy was to increase exports and encourage local industrialists. We don’t want to politicize markets,” he said.
“Some argue that domestic industrialist have to be safeguarded. When the prices of imported goods increase, the local industrialist is able to sell his goods easily. It is beneficial to him. Increase of imported goods’ prices does not impact local producers. As for the exporters devaluation is beneficial because it will be an encouraging factor.”
“They say external debt increases when the rupee devalues against the dollar. Dollar loans are paid back in dollars. When the rupee is devalued, the amount you have to pay in dollars becomes less. We have to find dollars to settle dollar loans.  Export earnings will have to be increased to find dollars in order to settle the dollar loans,” he added.
The State Minister further noted that currencies of several countries maintain a floating exchange rate system. “Indian rupee devalues much more than the Sri Lankan rupee. It is same with the Indonesian Rupiah and the Philippine pesos,” he said.
Dr.de Silva responding to the allegations that devaluation of the rupee is a political game said, an investigation has to be carried out to if there is such a move. Some say it is political game and if so those who are responsible should be penalized. However, I don’t elaborate on it as I don’t have sufficient data in relation to it,” he said.