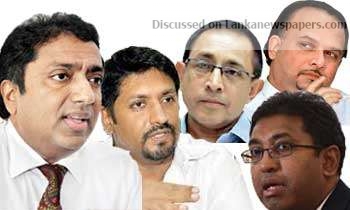 State Minister Dr. Harsha De Silva was named as the Treasurer of the party while Ruwan Wijewardene was appointed the Deputy General Secretary and State Minister Ajith P. Perera the Trade Union Secretary. Minister Sajith Premadasa will remain as the Deputy Leader while Ravi Karunanayake will continue as Assistant Leader.

Mr. Kariyawasam, who confirmed that he had been named as the new General Secretary of the party, said the other positions will be finalized at the meeting of the working committee today.

Mr. Premadasa said the party leader had nominated the names for the posts while the politburo had expressed its views with regard to the reorganization of the party. He said everything will be finalized today. “I would like to be elected to my post,” he added.

Another politburo member, who did not wish to be named, revealed that some party members had informed Party Leader Ranil Wickremesinghe that people expected something better. Mr. Wickremesinghe, in response, had suggested a ballot where the working committee and the parliamentary group are given the opportunity of electing office bearers for the party.