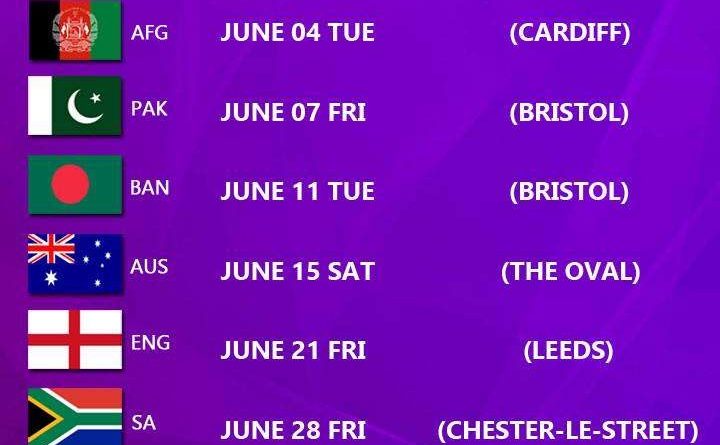 Sri Lanka will begin their 2019 World Cup campiagn against New Zealand on June 1, according to cricinfo.com.
The popular website has published the full but yet to be finalised scheduled for next year’s tournament in England which will see all 10 teams facing each other in a round-robbing stage before the top four proceed to the semi-finals.
The same format was used with nine teams in 1992.
Three days later Sri Lanka face Afghanistan in their next game. Both matches will be played at Cardiff. On June 7, Sri Lanka will face off, Pakistan at Bristol followed by Bangladesh on June 11.
Sri Lanka will meet the defending champions Australia on June 15 at the Oval and will have a five days break before their next game on June 21 against hosts England at Leeds. This will be followed up with six day. Their next assignment will be against South Africa at Chester-le-Street on June 28. At the same venue Sri Lanka battle it out against West Indies on July 1 before their final round-robbin clash against India.
Both semi-finals (July 9 and July 11) will have reserve days, as will the July 14 final.