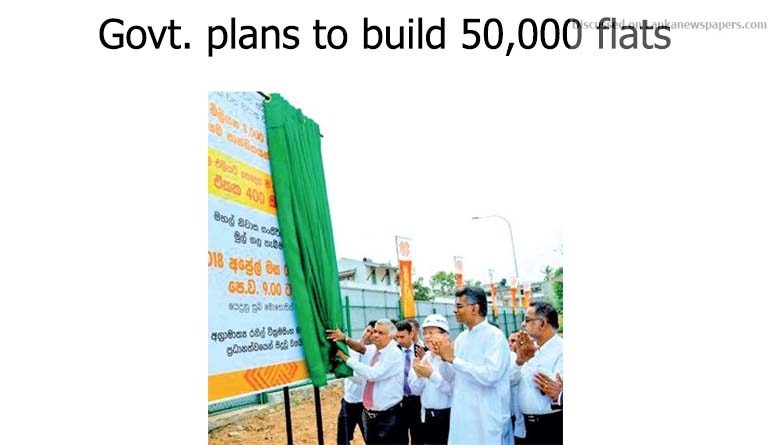 In the first phase, the Government expects to build 50,000 houses for low income families, and plans to find the funds needed to complete the project in the next few years, the Premier said.

Speaking at a recent event, organised to lay the foundation stone for a housing project consisting of 400 housing units for middle-income employees in the State and private sectors, Prime Minister Wickremesinghe said that when the project to build 50,000 houses is completed, low income families could be relocated from shanties for the first time.

He said that when the second and third phases are completed, housing problems will be solved permanently, and shanty dwellings can be removed, freeing up land for commercial purposes. The freed land could be used to develop the city and build office and shopping complexes, which will provide an additional income to the people in the city, he pointed out.

“The ultimate aim of the project, which is to be carried out in three phases, is to remove all the shanties from Colombo city within 10 years,” Prime Minister Wickremesinghe added.

The 50,000 unit housing project has already been implemented, and the Government has planned to complete the project by 2023, he said.

“We have also started programs to develop Beira Lake, and to develop the urban area around Colombo, and make Colombo a larger urban district. We will also be constructing new water supply schemes in Colombo, and will be ready to bear a great deal of expenses in Colombo within the next 10 years,” the Premier said.

The Premier further said that the construction of two new schools with all facilities, to be located in the Colombo Central and Colombo North areas, has been planned under the Education sector development activities.