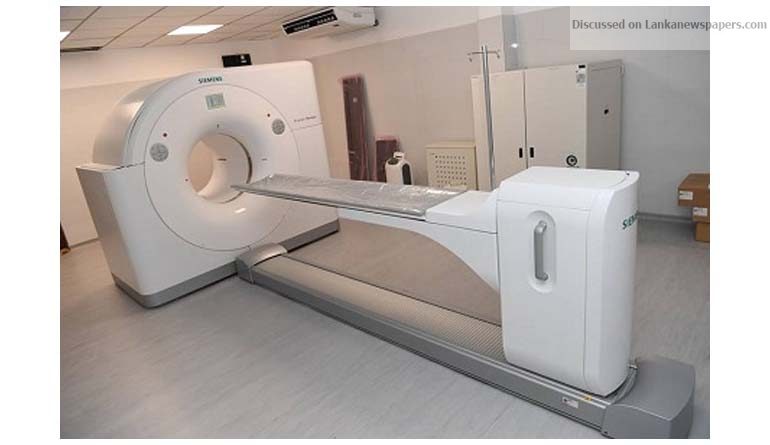 The Positron Emission Tomography (PET) Scanner purchased for the Apeksha Hospital in Maharagama, with public funds collected through a campaign supported by Manusath Derana, was officially vested with the people today (April 1).

The long-awaited scanner, which was flown into Sri Lanka on December 24 last year, formally came into operation at a ceremony held at the hospital with the participation of Health Minister Dr Rajitha Senaratne.

An initiative was launched by the National Cancer Institute in Maharagama (renamed as Apeksha Hospital) in 2016 and was spearheaded by the Fight Cancer Team, part of the Kadijah Foundation of M.S.H. Mohammed, to seek public assistance for the purchase of a PET scanner.

An essential requirement for the National Cancer Institute in Maharagama, the PET Scanner allows doctors to detect the early onset of disease before it is evident on other imaging tests.

On the 17th of March, 2016 the Director of the Apeksha Hospital Dr. M.Y.K. Wilfred approached Manusath Derana, the CSR initiative of TV Derana, to request assistance to raise funds to purchase the PET Scanner.

The hospital which had already collected Rs 6 million by then needed to reach the targeted total of Rs 200 million. In this backdrop Manusath Derana decided to raise public awareness in the campaign to achieve its target of Rs. 200 million to purchase the PET Scanner.

The target was achieved in June 2016 as a result of the dedication of a number of individuals, including generous donors and media organisations.

The collected funds were later handed over to the Health Ministry while upon completion of the tender process and Cabinet approval, the scanner was purchased from ‘Siemens’ in Germany.

Purchased at a cost of Rs.202 million, the advanced scanner is capable of conducting more than 100 scans a month and it will considerably improve treatment services for cancer patients at the hospital.

TV Derana extends its heartfelt gratitude to everyone who rendered their support in achieving the success of this effort to make a PET Scanner available to the people of Sri Lanka.