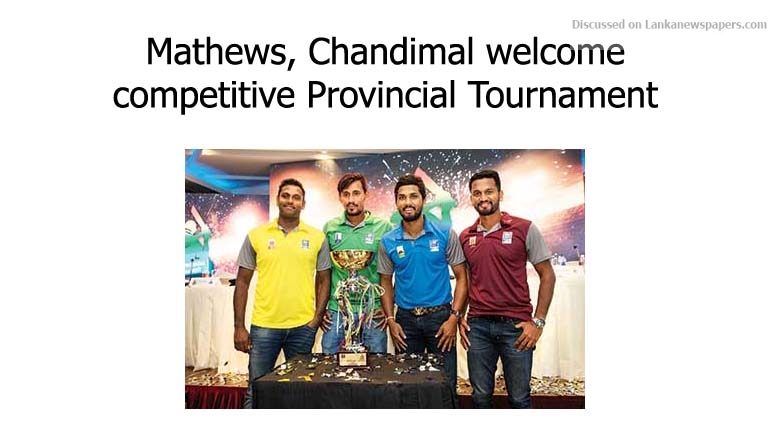 Sri Lankan captains Angelo Mathews and Dinesh Chandimal welcomed the new Inter-Provincial First Class tournament that is expected to raise the level of competitiveness. A four-team competition of four days duration is believed to be the treatment for the troubles of domestic cricket. Current domestic structure where there are 24 teams has been severely criticized and the new tournament is welcomed by all and sundry.

“I am grateful for SLC for conducting this tournament. We have the top 60 players in the country participating and it will be a very competitive event,” Mathews, who has recovered from a calf injury told journalists.

“I remember I came into the national team after a good Inter-Provincial tournament in 2010. I remember the same thing happened to Ajantha Mendis, who had a good tournament in 2008. I am sure this tournament will benefit us in many ways,” Chandimal went onto say.

The tournament will start on Friday. All teams will play three games each before the top two teams qualify for the finals. There will be also day-night pink ball games to help players prepare for the upcoming tour of West Indies. The Barbados Test in June will be a day-night affair.

Sumathipala addressing the gathering revealed that SLC had decided to seclude a period of five months for domestic cricket. “This is an important tournament for us in Sri Lanka. Early days we had to choose players from just 60 schools. In 1998, we realized that this is not going to work. .So we introduced Provincial and District cricket at grass root levels. Because of that, someone like Suranga Lakmal from Deberawewa could emerge. Today I am glad he is captaining the Galle team,” Sumathipala said.

“This format is what gets us closest to Test cricket. We are also glad to announce that from December 1st to April 30th we will dedicate that period for all our domestic cricket. We didn’t have a domestic calendar before. That will be known as our domestic season. Apart from the time when we have a World Cup or so, where we can’t get our top players get involved, on other occasions, the best of players will be available to play domestic cricket.