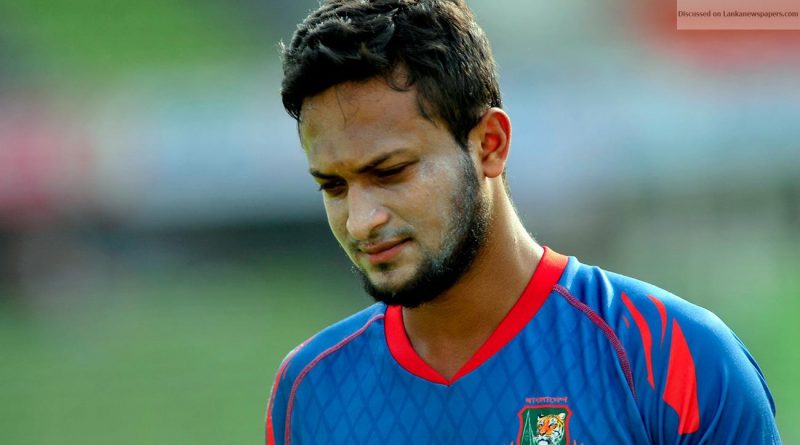 The smooth functioning of the Hero Nidahas tri-nation T20 series was sullied by an incident involving Bangladesh captain Shakib Al Hasan which to say the least was outrageous and left a black mark on Bangladesh’s cricket internationally.

A captain or a coach getting upset at an umpiring decision is not new in cricket or sports in general but one cannot recall an instance of a captain calling his players off because of his disagreement with the umpire’s decision.

This said state of affairs took place in the final league match between Sri Lanka and Bangladesh at the R Premadasa Stadium on Friday that ended in a nail-biting finish with Bangladesh winning by two wickets off the penultimate ball to qualify for the final with India.

What Shakib did was not a reaction to being triggered by the opposition it was purely a protest against the umpires who failed to call the second of two successive bouncers delivered at over shoulder height a wide. It was quite normal for the Bangladeshi batsmen in the middle and for Shakib to lose his cool at that point as the match was delicately poised and one wrong call could have changed the course of the match.

But what was totally shocking was when Shakib gestured towards his batsmen to leave the ground. Although Shakib denied at the post-media conference that he was trying to get his men off the field it was all there for everyone to see him actually repeating it four or five times. If it was a weak batsman out there in the middle who had responded to his call his action would have turned out to be an absolute embarrassment for all the stakeholders concerned including Bangladesh themselves who could have conceded the match to Sri Lanka. But saner counsel prevailed and Mahmudullah did not respond to his captain’s crazy call and not only did he turn his own back on him but told Rubel Hossain his partner not to go off in what was a rare display of sanity during those few minutes of chaos. Mahmudullah then went onto score the required 12 runs – all off his own bat off the next three balls to provide one of the most extraordinary finishes to a T20I and put his team in the final.

Although it all ended well for Bangladesh the Bangladesh Cricket Board (BCB) must not sweep this incident involving Shakib under the carpet but must introspect ask themselves whether Shakib is the right man to lead their team in the future. Until he arrived and took over the captaincy from Mahmudullah, the Bangladesh team was at their best behavior.

However a great cricketer Shakib might be for him to get carried away by such an incident forgetting his responsibilities as captain is dangerous especially when he is in charge of the team. A leader can’t be a quitter as Shakib clearly made it out to be. Probably he had in his mind that his team had no chance of winning the game and that’s why he tried to call the off on the pretext of the umpiring decision.

His action also raises the question that he has no faith in his team and he was not backing the specialist batsman out there to get the job done and then almost dictate his decision of quitting the team raises serious question marks over his leadership qualities. BCB must ask the question whether they should allow a man of his level of patience to continue as captain especially in a fiercely competitive environment.

Bangladesh became a cricketing force in the past three years because of the discipline that was brought into the team by their former head coach Chandika Hathurusingha. A no-nonsense coach the first thing that Hathurusingha did as soon as he took over in June 2014 was getting the BCB to suspend Shakib from all cricket for six months. Shakib was not even granted an NOC to play in overseas competitions until the end of 2015.

The BCB stated that the punishment was handed out because of Shakib’s “serious misbehavior” with coach Hathurusingha and for his altercation with a spectator during an ODI against India at Mirpur.

The president of the BCB at the time Nazmul Hassan said, “He (Shakib) has a severe attitude problem, which is unprecedented in the history of Bangladesh cricket. We think that his behaviour is such that it’s directly impacting the team. What is perhaps more alarming is that other players have started to behave like him [Shakib]. If this continues, our future will be destroyed. So that’s why we believe he deserves a strict punishment. Our board has unanimously decided to ban him from competitive cricket for the next six months, both national and international cricket. Also till December 31, 2015, he won’t receive any NOCs for foreign tournaments and his current NOCs have been withdrawn.”

Hathurusingha is no longer with Bangladesh cricket and if the BCB does not address the Shakib incident that took place in Colombo seriously their cricket is bound to go on a downward curve.

The BCB should not let Shakib get away as the ICC did. ICC match referee Chris Broad’s decision to hand out only minor sanctions to Shakib – one demerit point and losing 25 percent of his match fee was like a slap on the wrist and brought the ICC under heavy criticism for the inconsistent way that fines and penalties are handed out especially against South African fast bowler Kagiso Rabada who was recently imposed a two-match ban for an offence that is seen as one of a much lesser violation than what Shakib did.

Indian cricket commentator Harsha Bogle tweeted, “Getting one demerit point and losing 25% of the match fee for what happened yesterday (Friday), is like getting a pat on the back.”

After many years of hardship Bangladesh cricket is on the ascedency and for them to improve further the BCB has a responsible role to play.