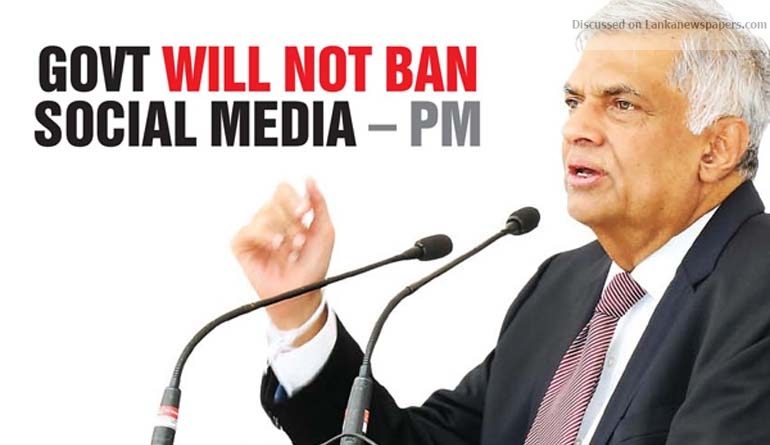 Prime Minister Ranil Wickremesinghe yesterday (14) said that as the person who introduced Internet to Sri Lanka, neither he nor his Government has any intention to ban social media, but would, instead, introduce a proper mechanism to monitor hate speech, lies and racism, taking precedents from countries like Germany, England and Scotland in the coming weeks.

Wickremesinghe, participating in the opening ceremony of the swimming pool at Isipathana College, Colombo, added that considering the problems faced by Sri Lanka and the rest of the world due to hate speech on social media, the Government plans to put in place a proper mechanism to monitor social media networks against hate speech. He further stated that he has given instructions to the Ministry of Foreign Affairs to hold discussions with the diplomats of other countries, which face similar problems in order to come up with solutions.

However, social media also provides a platform for hate speech and racism, Wickremesinghe pointed out.

Referring to the recent communal riots, which erupted in Ampara and Kandy, he said that some people have added fuel to the fire on social media networks like Facebook.

“Due to this reason, the security forces on 6 March recommended that we block a few social media networks temporarily. We approved it and they informed us that…… they could bring the tense situation under control by 7 March. Prior to these incidents, we had informed Facebook that the social media network was being used to spread lies, hate speech and racism. But they did not respond swiftly,” the Premier added.

“That is why the country needs a mechanism to deal with it. A team from Facebook will arrive in the country today (15). The Government hopes to discuss this matter with them at length,” he elaborated.

“This is not a problem which affects only our country. Germany is considering passing laws to monitor hate speech on social media.

England and Scotland also have passed committee reports about the same issue. Companies like Facebook and Google have come under criticism for providing platforms for the distribution of propaganda of terrorist organizations such as the Islamic State (IS). This has become a grave issue for many countries because they lack a mechanism to monitor these companies, but a mechanism should be implemented for that as soon as possible,” he said.