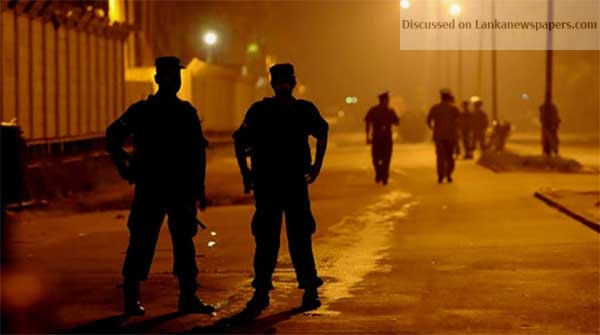 A 24-hour curfew was imposed under emergency regulations in the Kandy Administrative District yesterday, following several isolated violent incidents, which resulted in at least two deaths being reported.

At least two deaths were reported in the Kandy area yesterday (7) due to mob violence, informed sources said.

An individual had reportedly died of a heart attack when a mob had stormed into his shop. A second death was reported due to a grenade explosion when a person carrying the explosive had attempted to storm into a Mosque in Ambatenna.

The incidents had been discussed at a high level meeting, chaired by President Maithripala Sirisena, in Kandy yesterday.

Prime Minister Ranil Wickremesinghe issued a statement yesterday conceding that several shops were set ablaze or vandalized in the Katugastota and surrounding areas. He claimed that a hand grenade possessed by one of the mob members, had also exploded during a tense situation in Ambatenna. He denied reports that suggested that several Buddhist monks were injured in these isolated incidents. The Premier also noted that the Central Province Security Commandant Major General Rukman Dias has been appointed to lead the security forces in alliance with the Police to quell disorder of any nature.

Despite certain reports, the Menikhinna Police said that there were no cases of injuries or violence reported yesterday. This was in response to social media posts stating that several shops were burnt in Menikhinna yesterday.

Under emergency regulations, curfew was imposed in the Kandy administrative District for 24 hours. Police Media Spokesman Superintendent of Police Ruwan Gunasekara noted that on the instructions of Inspector General of Police Pujith Jayasundara, curfew was imposed from 4 p.m. yesterday till 4 p.m. today (8). He emphasized that people who violate the curfew would be punished according to the prevailing laws.

He further confirmed that one person died in the Pujapitiya area due to a clash. Meanwhile, the Katugastota Police confirmed that a clash between groups of individuals resulted in one death and three others being injured. The Katugastota Police further noted that several other incidents were reported in the area on 6 March and on yesterday, but they were not in a position to confirm all details.

Meanwhile, Chief of Defence Staff Admiral Ravindra Wijegunawardene making his presence at the weekly Cabinet briefing yesterday noted that several isolated incidents of mob violence were reported in various suburbs of the Kandy District. According to him, all incidents were swiftly addressed by the Security Forces that were on patrol or were on curfew duty in the area. He refused to acknowledge that were casualties. He added that all religious locations in the Kandy suburbs have been provided with security.