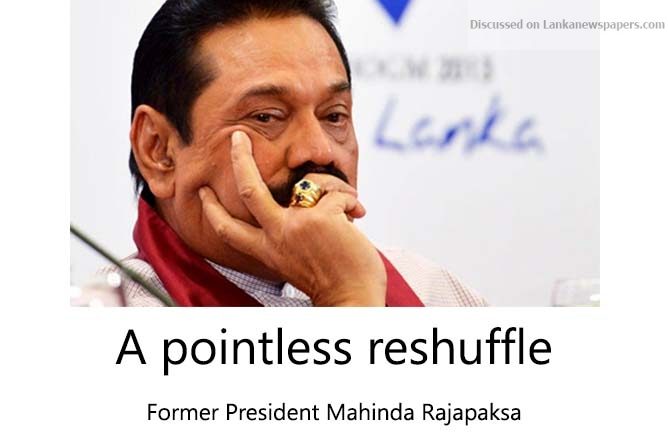 Former President Mahinda Rajapaksa said today that the Cabinet reshuffle was pointless as there was nothing new in it, while observing that removing the portfolio of Highways from the Minister from Kandy was a loss to the Kandy people.

Speaking to the media after visiting the Sri Dalada Maligawa and the two prelates of the Malwatte and Asgiriya Chapters in Kandy Mr. Rajapaksa criticized the Local Government Elections Act under which the recent elections were held claiming that the new local government election law has created a mess in many local government bodies as no party had been given the absolute majority in them.

He attributed the situation to what he said the borrowing of clauses from here and there to enact the law. “This is a wrong system. Under this system winner gets less and the opposition parties get more. Parties lost in all wards get a lot of seats” the former President charged.

Accusing that this government has done nothing during its tenure the Kurunegala District MP said what they have achieved so far was only “taking loans and taking revenge” (Naya gaththa, pali gaththa).

He said that the revenge policy of the government was such that a judge and and a former Chief Justice were going to be hauled before the courts just because they had expressed a certain opinion. “This is a very dangerous trend. A judge must have the right and the freedom to deliver a ruling. This applies to the Attorney General’s Department as well. At this rate, even the present Attorney General could be accused of expressing his view on the duration of President’s term” he argued.

Mr. Rajapaksa said that the construction of highways and roads was moving at a snail’s pace as the present rulers did not know how to do it. The main reason is these people do not have money and the monies borrowed from other countries are spent on food. They have taken an incredible amount of loans while accusing the former government for borrowings, he claimed.

The former President argued that economy would not be strong and investors would not come to the country so long as the country is unstable and added that the rupee was depreciating each day, sky rocketing the prices. If the government cannot rule the country, the members of the Parliament must take a decision to dissolve the parliament and hand over the country to somebody who is capable do so. (J.A.L. Jayasinghe)