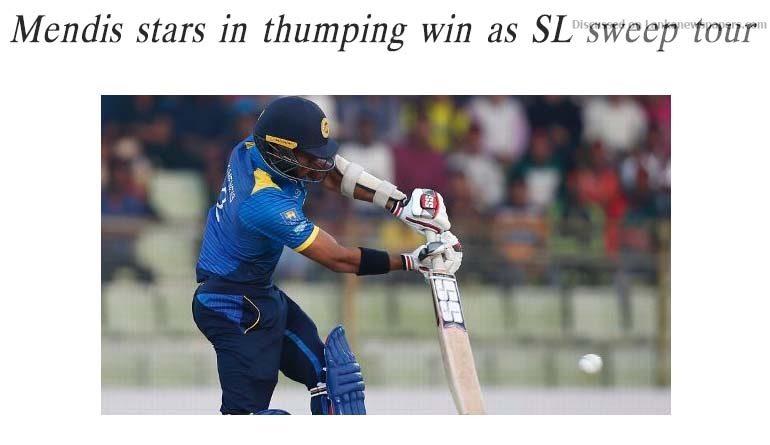 Sri Lanka ended their Bangladesh tour in style, crushing the hosts by 75 runs to wrap up the T20 series 2-0. Kusal Mendis, who has been Sri Lanka’s most dominant batsman across formats in the last four weeks, starred again with 70 off 42 balls to propel the visitors to 210 for 4. Shehan Madushanka, who was playing his second T20I, and the spinners then skittled Bangladesh for 135 in the chase.

After being sent in, Sri Lanka amassed their highest total against Bangladesh and fifth highest overall. Mendis and Danushka Gunathilaka had set the base with a 98-run opening stand before Upul Tharanga and Dasun Shanaka plundered 45 in 19 balls to provide the finishing kick.

Mendis continued from where he had left off in Mirpur and went after the Bangladesh bowlers from the first over. He punished debutants Abu Jayed and Mahedi Hasan in the early exchanges before lofting left-arm spinner Nazmul Islam over his head for a six in the fourth over.

Gunathilaka, who was dropped twice on 15 and 28, contributed 42 in a 98-run opening stand, before part-time seamer Soumya Sarkar had him holing out to long-off in his first over.

Mendis, who had brought up a 29-ball fifty, then ceded the stage to Thisara Perera, who was promoted to No. 3. Thisara laid into Sarkar, hitting three boundaries in the 14th over, including a six over the sight screen. He added 51 off 27 balls with Mendis before he was caught at long-off too.

An over later, Mendis top-edged a pull to deep midwicket, but Tharanga and Shanaka sustained the momentum. Tharanga slammed Jayed for two fours and a six, back-to-back, in the 18th over before Shanaka took four boundaries off Mustafizur Rahman in the next over. Tharanga fell for 25 in the last over of the innings but Shanaka’s unbeaten 30 off 11 balls helped Sri Lanka finish strongly.

Sri Lanka then built on their surge by picking up three wickets in the first three overs of the chase. Akila Dananjaya had Sarkar top-edging a catch to Jeevan Mendis at point while Madushanka removed both Mushfiqur Rahim and Mohammad Mithun in the same over.

When Tamim Iqbal became debutant Amila Aponso’s maiden international wicket, Bangladesh were 59 for 4. Jeevan Mendis then trapped Ariful Haque for 2 in the next over to extend Bangladesh’s misery.

Mahmudullah fought with 41 off 31 balls and added 42 for the sixth wicket with Mohammad Saifuddin. The end, however, was swift for Bangladesh: they lost their last five wickets 25 runs to be bowled out in 18.4 overs. Gunathilaka had applied the finishing touches by dismissing Mustafizur and Jayed in four balls.