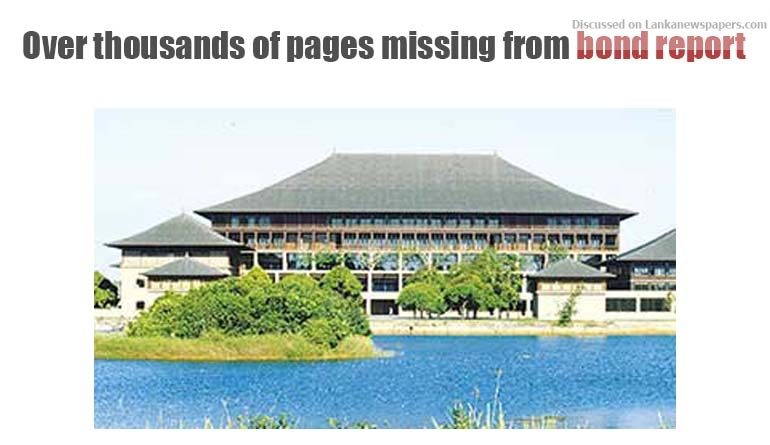 The JVP and Joint opposition MPs demanded from Speaker Karu Jayasuriya yesterday to summon Secretary to the President to parliament and question him for misleading parliament by providing it with an incomplete copy of the report of the bond commission.

The two opposition parties said President Maithripala Sirisena himself in his address to the nation on the Bond Commission report stated that the report comprised more than 6,000 pages but the report presented to parliament had only 1,152 pages.

UPFA MP Bandula Gunawardena: The President said that the report he received from the Presidential Commission of Inquiry that investigated the Treasury Bond scam had more than 6000 pages. However, the report we received has only 1154 pages. How can we take this matter into the debate when we do not have full information? Therefore, I request you, honorable Speaker, to take measures to provide us the rest of the pages. Please discuss this issue with the President and give us the complete report.

Leader of the House and Higher Education and Highways Minister Lakshman Kiriella said the MPs should accept the report sent to parliament by the President. “Let us accept this report submitted to parliament by the president. If you are saying that there are missing pages, then there is no debate. We cannot give a debate if you say that there are missing pages in the report you received,” the Minister said.

Speaker Karu Jayasuriya: Several people also asked about this matter from me this morning. So I contacted the Secretary to the President to clarify these claims. The Secretary informed me through a letter that the Commission had received and collected many documents while it was conducting the investigations and some of them had to be bound separately as annexures. The government printer had been tasked with the binding the annexures and once the task is completed they too would be provided to MPs.  The Secretary in his letter says: “The documents which are in box files have been sent to the Government Press to print as books. I have not received those books yet. But I have been informed that three stocks of books will be provided soon. When the books are received they will be submitted to the institutions which conduct further investigations. On the directions from the Attorney General I will take measures to submit these books later.”

MP Dinesh Gunawardena also agreed with Dissanayake’s stance. “All the media channels telecast the president’s statement and in that statement the President said that there are more than 6000 pages in the Bond Commission Report. But we have not received them. Parliament has the monetary power and has powers to summon officials. The Secretary to the President should be summoned to parliament and ask for clarifications. After that we can decide what we should do regarding this in the future.”

MP Bandula Gunawardena again said that several UNP Ministers had made statements that they had received the report before parliament. “I would like to know how this happened,” he asked. “We need copies of the exact report received by the President.”

Fisheries Minister Mahinda Amaraweera said however that no one in the UNP had received the report prior to parliament.