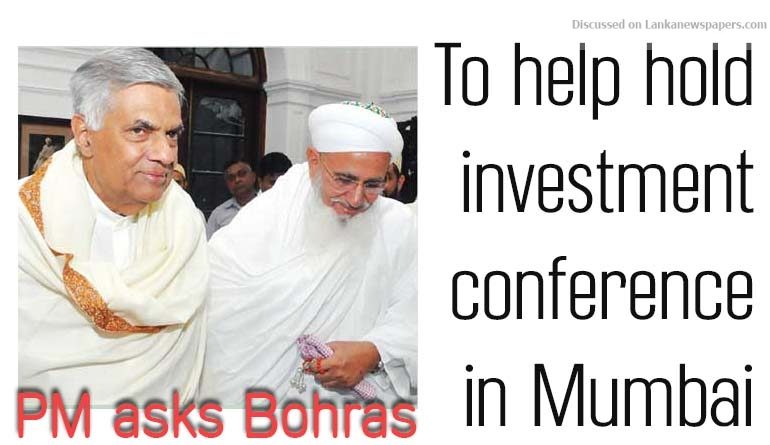 Wickremesinghe made this request to the Spiritual Leader, who was on a visit to the island country, when he called on him in Colombo on Monday.

Syedna Mufaddal Saifuddin assured his fullest support to the Prime Minister and his government.

The Dawoodi Bohras, a global community of Shia Muslims whose spiritual center is in Mumbai, are a thriving business community, “who are well disciplined and helpful” as the Sri Lankan Prime Minister put it.

Wickremesinghe described the Bohras as a business community which “minds its business” and lives in peace and harmony with other communities in Sri Lanka and elsewhere in the world.

“You have played a significant role in the economic development of Sri Lanka,” the Prime Minister said.

On his part, Syedna Mufaddal Saifuddin pledged the community’s support to Sri Lanka’s development, and wished Wickremesinghe continued success in serving the people of the island nation for many more years to come.

The Prime Minister was told that successive Spiritual Leaders of the Dawoodi Bohras have never failed to advice their followers to be loyal and supportive of the countries they live in – a dictum the community has been following in letter.

Sri Lankan Bohra Community officials who were present at the meeting told the Prime Minister about the local community’s desire to hold the next ‘Moharram’ in Colombo on a massive scale with 40,000 to 50,000 participants from abroad and sought the government’s help to organize it. The Prime Minister said that he would “certainly” extend all help.

The Syedna also told the Prime  Minister of his community’s desire to work for the development of war-devastated  Jaffna and the Northern Province which had a strong resident Bohra community before the war started.

Syedna Mufaddal Saifuddin has visited Jaffna three times and has helped renovate the Bohra mosque on Hospital Road in Jaffna. He is keen that the Bohra community should go back and endeavor to re-start or start new businesses and entrepreneurial activities there.

The Prime Minister welcomed the idea of increasing investments in Jaffna.

He also thanked the Spiritual Leader for visiting the island country.