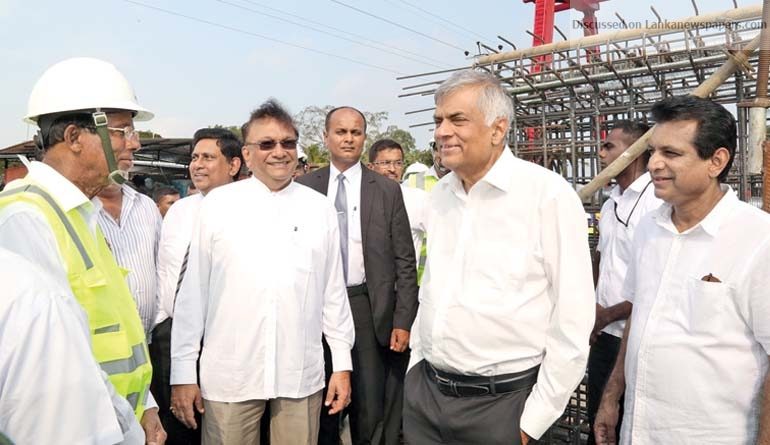 The Central Expressway which will connect two airports, two ports, industrial zones, tourism zones and main cities, will create a new economy in the country, said Prime Minister Ranil Wickremesinghe yesterday, undertaking an inspection tour of the work being done on the Central Expressway.

The Prime Minister conducted his tour at the Kurunegala-Gattuwana and Meerigama-Galdeniya sections of the Expressway under construction.

This Expressway will help this region as well as the country. Through it, the number of tourists visiting Kandy will increase and at the same time we will see many developments from Kandy to Kadawatha, Kadawatha to Colombo and thereafter to Hambantota, he said further.

“The Expressway from Colombo to Kandy is being constructed, Kandy city will be developed, former Bogambara prison will be turned into a cultural and tourism centre and we are also looking for land to create another industrial zone in Kandy,” the Prime Minister said.

“In Mawathagama too we will build an industrial zone, and we have already found the land for that. Ingiriya, Iranawila too will have tourism and industrial zones”, the Prime Minister added.

The Central Expressway, he said was started in 2015 to improve the infrastructure in the region.

“This is the third road from Colombo to Kandy. During the time of our kings, people used the road from Colombo to Ruwanwella, and then to Kandy via Balana. But today, we use the road built by the British. This Expressway is being built on the road used by our ancestors. This road will not end in Colombo. The government has planned to extend it up to Hambantota, where you have an airport, port and soon industrial zone, the Prime Minister added.

“The second phase of this construction would be undertaken by a Sri Lankan company. This is the first time that an Expressway contract has been granted to a local company. Thus far it was only foreign companies from Japan or China undertaking such construction,”the Prime Minister said.

“But here we have 16 local companies come together, and split the work into four groups to undertake the construction. So we believe that they have the capability to undertake this project and hope that this company in future will also be able to bring in foreign exchange into the country, through construction projects abroad”, Premier Wickremesinghe said.

The Expressway will allow commuters to travel from Colombo to Kandy in one and a half hours.