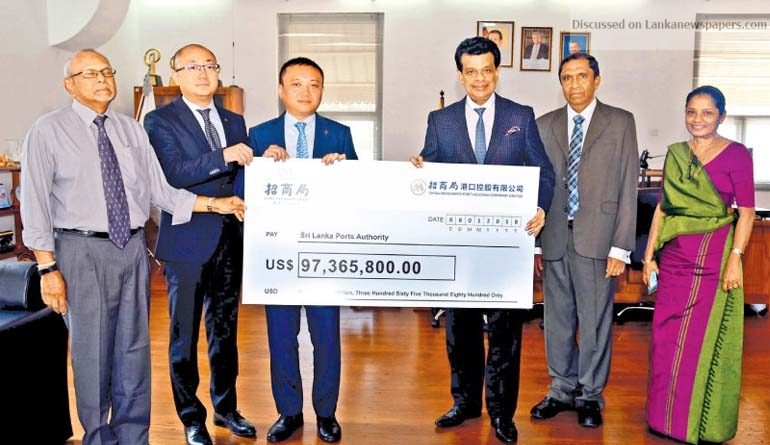 China Merchant Port Holdings (CMPort) made the payment of US$ 97.365 million to the Sri Lanka Ports Authority (SLPA) as the second tranche of its investment in the Public-Private Partnership (PPP).

The payment, recently in January, takes the total paid by CMPort to date to US$ 389.462 million.

“CMPort is one of the most successful global companies in the ports sector, and their investment in the Port of Hambantota can be described as a credible vote of confidence in its potential as well as in the economy of Sri Lanka,” said Parakrama Dissanayake, Chairman SLPA.

The two companies established in Hambantota plans to invest an additional US$ 400 million to US$ 600 million on phase I and II of the Hambantota Port, in 2018-19. These investments will attract many other foreign investors to the country, making Sri Lanka a pivotal maritime and logistics centre.

One of the largest container terminal operators globally, CMPort’s operations around the world, which include Colombo International Container Terminal (CICT), handled, more than 95 million TEUs in 2016.

In China, the group has operations in Hong Kong, Shenzhen, Ningbo, Qingdao, Dalian, Tianjin, Zhanjiang and Xiamen Bay. CMPort also has container terminal operations in the United States, Nigeria, Djibouti, Togo and Turkey as well as many countries in Asia and Europe.

The first payment of USD 292.1 million from China Merchant Port Holdings (CMPort) Co Ltd for the handing over of operations of the Hambantota Port was credited to the US Dollar account of the Government of Sri Lanka maintained at the Central Bank, last December.

The new agreement stated that “30 percent would be paid on the date of signing, 10 percent after a month since signing and to pay the remaining 60 percent within six months of signing”.

The Government signed the Framework Agreement with CMPort for USD 1.12 billion.