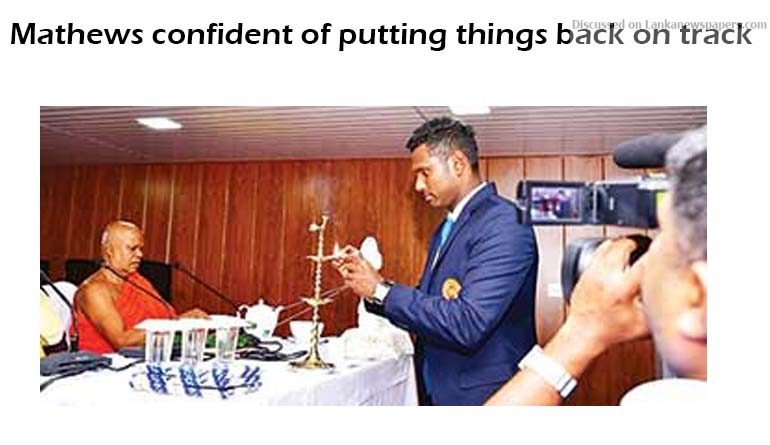 Having taken over the reins of Sri Lanka’s ODI and T-20 team again, captain Angelo Mathews was confident of a good showing during the tour of Bangladesh. The 16-member squad and the coaching staff assembled at SLC headquarters at Maitland Place yesterday evening for the per-departure photograph and religious ceremonies. The team will leave for Dhaka today morning.

Sri Lanka’s tour kicks off with a tri-nation tournament where Zimbabwe is the third team. Sri Lanka will also play two Tests and two T-20 Internationals in Zimbabwe.

“It is going to be a challenge playing Bangladesh in their conditions. They have only lost to England in recent times. They have won against best teams and are a formidable opponent at home. We have got a balanced team and we hope to do well,” Mathews told journalists.

There is a lot of excitement as Kusal Mendis, perhaps the brightest batting talent in the country, makes a comeback to the team after scoring heavily in domestic cricket. The 22-year-old, who has received rich praise from former greats as the best young batsman in the world, was axed for the recent tour of India. He is expected to retain his customary number-three position during the Bangladesh series.

“We know what a quality player he is and (we’re) very excited to have him back in the team,” Mathews went on to say.

Mathews, who hurt his hamstring during the tour of India and returned home without playing the third T-20 International in Bombay, said that he will play only as a specialist batsman at the start of the series. However, he is prepared to bowl if the need arises.

“The first few games I will not be bowling. But we will play it by the ear. Looking forward to do some bowling at some stage. Fitness is going good; I am trying to look after my body,” Mathews added.

Sri Lanka had a tough 2017 across all formats of the game, particularly in ODI cricket. Three 5-0 whitewashes saw Sri Lanka slip down to number eight in official ODI rankings. Currently Bangladesh are ranked above Sri Lanka at number seven.

“Let’s take one series at a time. We certainly can put things back on track,” a confident Mathews said.