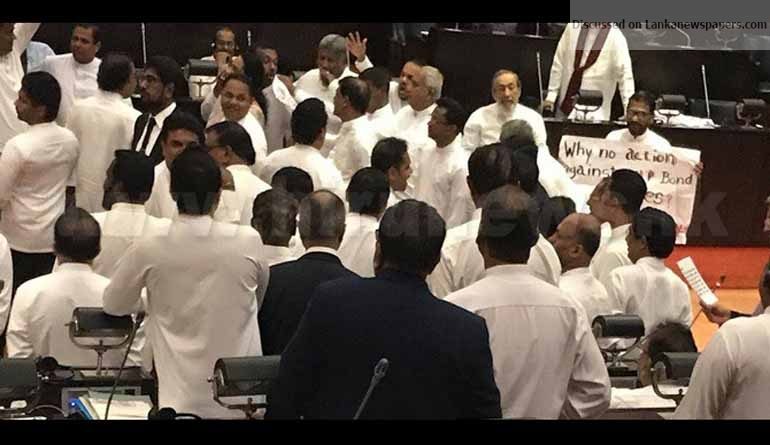 The hallowed Chamber of Parliament once again turned into a rowdy arena with Members throwing punches, hurling objects and invective as the proceedings into the much hyped debate into the report of the Presidential Commission of Inquiry, which investigated and inquired into the issuance of Treasury Bonds was taken up yesterday.

Some MPs were injured when Joint Opposition (JO) Members invaded the well of the House carrying placards and shouting ‘Hora (thief)’ when Prime Minister Ranil Wickremesinghe rose to make a statement.

The fracas erupted when Opposition members protested against Speaker Karu Jayasuriya and the Government for failing to table the report of the controversial Treasury Bonds scam in Parliament as promised at the Party Leaders’ meeting held on 9 January.

When the House commenced sittings, Speaker Jayasuriya announced that the Presidential Secretariat had informed him that the Bond Commission report and 34 reports of Presidential Commission of Inquiry to Investigate and Inquire into Serious Acts of Fraud, Corruption and Abuse of Power, State Resources and Privileges (PRECIFAC) would be made available to Parliament after one more week. The Secretary to the President had also informed that copies of the Bonds Commission report had been referred to the Attorney General, the Central Bank and the Commission to Investigate Allegations of Bribery or Corruption.

Leader of the House, Minister Lakshman Kiriella: “The JO and the Sri Lanka Freedom Party asked for a debate. We are ready for the debate. There is no report. Without getting ready they demand a debate.”

Chief Opposition Whip Anura Kumara Dissanayake: “We have been demanding that the Bonds Commission report be tabled. At the last Party Leaders’ meeting we came to an agreement that the Speaker would get the report tabled and thereafter we would hold a Party Leaders’ meeting to decide on the debate. A summary of the report had been publicized by the President in his address to the nation. In his summary, the President said that there was a loss of Rs 11,000 million to the country, out of which a loss of Rs 8,500 million was to public funds. In addition, public funds were used for the conduct of the affairs of the Commission. These details should not be hidden or only limited to the knowledge of a few. The Parliament should be informed of these. We have asked for these reports under the provisions of the Right to Information Act.”

JO Parliamentary Group Leader Dinesh Gunawardena: We had requested the President to give us a copy of the report. The Secretary to the President has said that he would a give a copy to the Janatha Vimukthi Peramuna. The JO has 53 MPs. We asked at the Party Leaders’ meeting for the tabling of these reports in Parliament. This is a serious question. The Government says it does not have the report. It was promised at the Party Leaders’ meeting on 9 January that the first item on the cards for Parliament yesterday (10) would be the tabling of the report. Now, the officials cannot override the promise given by the Speaker and ask for more time. Former Speakers Anura Bandaranaike and Chamal Rajapaksa have established that Parliament is above other institutions, including the Judiciary. Now it is up to you as the Speaker to use your powers. You have the powers to summon any public official and ask for any public document. The entire country is waiting to see the report. You can summon the Secretary to the President and ask him to come with the report.”

Prime Minister Wickremesinghe: “MP Dinesh Gunawardena called and asked me to convene Parliament. It is not easy to call the MPs for an urgent sitting as they are campaigning in their villages for the forthcoming elections. When I convene Parliament, as per the provisions of the Standing Order Number 14, I have to reveal the reasons for convening. Then, I said that I would convene Parliament to make a statement, and to convene Parliament on 10 January. It is upto the President to decide whether he would make the reports public. Before presenting the report to the House, it should be presented to the Cabinet.”

MP Bandula Gunawardena: “Parliament has been convened to debate the Bonds Commission report and not to listen to a statement from the Prime Minister.”

Opposition Leader R. Sampanthan: “The reports should be tabled at its earliest possible time. This is a matter pertaining to public funds and the Parliament has responsibility over public finances. This should be debated. We should investigate frauds and find the truth. There was a time when we did not know what happened to similar Commission reports. I thank the President and the Prime Minister for this report. The public should not be given the impression that we are shying away from the Commission report or from the debate.”

Prime Minister: “We need to talk about the follow up action to be taken on the Committee on Public Enterprises report, on Treasury Bonds issuances. The Speaker could decide when the debate on the Bonds Commission report is to be held when he receives the report. That is why we convened the Parliament yesterday.”

MP Vasudeva Nanayakkara: “When we convened the Parliament, the objective for the special sittings had been mentioned as debating the Bonds Commission report. The report is not on our tables. We cannot let the Prime Minister make a statement on a report we have not seen.”

Prime Minister: “Special sittings are convened for a special purpose. I need to make this statement. I will make it and thereafter you could debate or state your opinion. I did not know whether the report would be made available or not. I was asked to convene the Parliament, I convened it.”

Speaker: “The Presidential Secretariat has promised to give us the reports next week. I do not want to see a conflict between the President and the Parliament.”

Speaker: “One has been sent to the Commission to Investigate Allegations of Bribery or Corruption (CIABOC).”

Dissanayake: “We should have been given it before it was given to the CIABOC. Since when does the CIABOC come above the Parliament?”

Tamil National Alliance MP M.A. Sumanthiran: The report should have been sent to the Parliament before it had been directed to other institutions. We call on the Speaker to instruct the Secretary to the President to come to the Parliament at 1.30 p.m. on this day (yesterday – 10 January) with a copy of the report.”

Dinesh Gunawardena: “The Speaker has powers to summon any public official. Call the relevant officials and table the report.”
Prime Minister: “At the end of this session, we could hold another Party Leaders’ meeting. I too will attend it.”

At this juncture, the Prime Minister started to read out his statement, but the JO MPs shouted slogans and held placards above their heads protesting against the Prime Minister making the statement. The Prime Minister continued while the JO MPs came down to the Well of the House shouting at him. JO MPs led by Dinesh Gunawardena marched towards the Mace. Sergeant-at-Arms, Anil Parakrama Samarasekera and his Deputy Kushan Jayaratne, held the Mace in the bracket when the Opposition MPs tried to grab it. While the Prime Minister kept reading out his statement, United National Party MPs too came down to the Well. JO MPs shouted ‘Kavuda Hora, Ranil Hora (Who is the thief, Ranil is the thief)’ while the UNP Members shouted ‘Mahinda Hora (Mahinda is the thief)’, the latter a reference to former President and current MP Mahinda Rajapaksa. Speaker Jayasuriya then suspended the sittings for 10 minutes at 11.05 a.m.

Though sittings were suspended, the protesting MPs remained in the Well and what followed was a regular donnybrook. The UNP MPs tried to grab the placards from the JO MPs and confronted them. In the melee, UNP MP S.M. Marikkar punched JO MP Gamini Lokuge. Lokuge was then seen slapping Marikkar. MP Kavinda Jayawardena who had been in the front line trying to grab the placards from the JO MPs was seen falling in the Well. Then MPs Marikkar and Minister Dr. Harsha de Silva came to the help of MP Jayawardena who had fainted and took him to the backbenches and sprinkled water on his face. When he could stand up, MP Marikkar helped him out of the Chamber. MP Johnston Fernando was seen punching UNP MPs Chaminda Wijesiri and Hector Appuhamy. When the MPs exchanged blows shouting vulgar words, MP Prasanna Ranaweera was seen being dragged away by his colleagues. Ranaweera’s shirt was torn by UNP MP Chaminda Wijesiri. MP Rohini Wijeratne was also caught in the melee and was seen kicked by other MPs. MP Prasanna Ranatunga was seen hitting MP Chaminda Wijesiri and running out of the place while the latter chased him. MP Ranjith Zoysa too was punched and kicked by the UNP MPs. Deputy Minister Ranjan Ramanayake however did not participate in the brawl as he was seen standing up, capturing the brawl on his mobile phone. MP Marikkar, who came from behind hit MP Gamini Lokuge again. Lokuge fell on his chair. Some MPs were seen throwing books at their colleagues. As the bloody brawl continued, Prime Minister Wickremesinghe too made advances but was prevented by Ministers Sagala Ratnayake and Vajira Abeywardena.

When the House resumed sittings around 11.50 a.m., the Speaker announced that he had received a letter from the President and then read it to the House. He said that he would meet the Attorney General in the evening. He said that he would let the Prime Minister deliver his speech again for the latter had been disturbed on the earlier occasion.

MP Anura Kumara Dissanayake protested saying that they would boycott the Party Leaders’ meeting where one thing is promised and the Speaker allows another thing to happen in the chamber, adding that it was easy to sort out the matters in the Chamber before the eyes of everybody. “There was bloodshed in this House as the Speaker failed to stick to his word. We won’t be here to listen to the Premier,” he said and walked out if the Chamber with his MPs.

When the Prime Minister got up to deliver his speech, JO MPs booed him and walked out of the Chamber.