High officials at the Ministry of Education are alleged to have been involved in awarding a tender to a bidder to purchase computer tabs despite the bidder not meeting the tender requirements at the time the tender was opened.

The recommendation letter further states, ‘The Procurement Appeal Board recommends the Cabinet of Ministers to set aside the recommendation by the Standing Cabinet Appoint Procurement Committee to award this tender to M/s Metropolitan Computers (Pvt) Ltd and to award the tender to (name withheld) who have submitted the lowest bid on this tender and proved that they have fulfilled all major conditions of the tender’.

Although the principal mandate of the Ministry of Education is to  formulate appropriate policies and monitor their implementation and delivery of quality education for all, it’s now learned how the top officials at the Ministry of Education (MoE) had failed to focus on their main duties. These duties are the formulation of policies, carrying out research and the monitoring and evaluations of educational delivery.

And they are accused of allegedly getting involved in bypassing Government procurement guidelines.
Despite SCAPC’s recommendation to purchase health safety computer tabs for Advance Level students and teachers, questions have been raised as to on whose direction the Procurement Appeal Board recommended the Cabinet of Ministers to award the tender to the bidder who had quoted a lower price, but did not meet the tender requirement?

The tender was opened on August 22, 2017. The selected bidder is alleged to have obtained the world acclaimed certification – the Federal Communications Commission (FCC) product certification- that guarantees health safeties of those who use these devices only after the tenders were opened.

“How can the MoE allow bidders to fulfill tender requirements after the tenders were opened? Why was only a selected bidder given this opportunity? The members of the SCAPC recommended Metropolitan Computers (Pvt) Ltd to be awarded the tender as their quoted ‘Acer’ brand had fulfilled all the tender requirements, specially the world acclaimed FCC product certification. This is the most important factor SCAPC considered rather than the quoted prices.

Consideration was on health safeties as these tabs are to be given to schoolchildren. According to World Health Organization the wireless devices emit non ionizing radio frequencies which pose a possible cancer risk. It’s also said that these radio frequencies decrease human sperm motility and increase sperm DNA fragmentation. That was why the FCC product certification was required in the tender document,” a reliable high official at the MoE said. 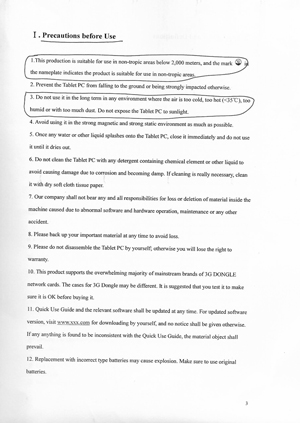 As a pledge given by the Government, Rs. 5 billion had been allocated from the 2017 Budget to purchase 159, 078 Computer Tabs for A/L students while another 36, 070 tabs are to be purchased to be given away to teachers.

Tenders were called in early this year and although many prospective bidders had taken part in the pre-bidding meetings only a few had forwarded their bids. Out of them only a few had been selected by the Technical Evaluation Committee (TEC). This committee had decided to offer the tender to the highest bidder amongst the selected parties considering the fulfillment of the tender requirements.

By letter dated October 12, 2017 and sent to all bidders, Additional Secretary (Procurement) Anuradha Wijekoon had stated that on the recommendation of the TEC, a decision had been taken to offer the tender to Metropolitan Computers Pvt Ltd of 85, Braybrook Place Colombo as per Section 8.2.1 of Government Procurement Guidelines and to send appeals if any against the decision taken by the TEC.

“All good efforts made by the TEC were in vain following the request made to bidders to appeal if they opposed the decision in awarding the tender to Metropolitan Computers,” sources said.

Be that as it may, when browsing through the user manual of the brand that had been selected by the Procurement Appeal Board, it was revealed that this production is suitable for use in non-tropical areas and that the device is not recommended to be used long term in any environment where the air is too cold, too hot, too humid or one that contains too much dust. 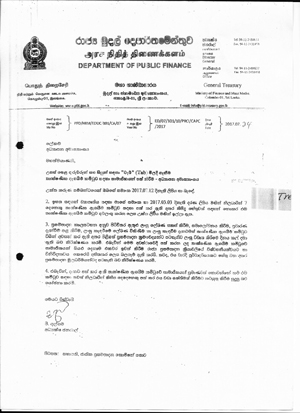 “Sri Lanka is a tropical country and how can the students use these devices unless they operate them in an A/C room,” sources queried.

According to sources who wished to remain anonymous, the ministry higher officials, although attempting to manipulate the TEC/SCAPC recommendation from the inception, in order to offer the tender to one of their ‘favourities’ since the bidder failed to fulfill the tender requirements, the TEC had stood firm with its decision.

Failing to influence the TEC members, by letter dated July 12, 2017, Secretary Education Ministry (Ref:ED/07/101/10/PRO/CAPC/2017) had made a request to the Department of Public Finance to appoint new members to the TEC. By letter dated July 24, 2017, Director General Department of Public Finance P. Algama in his reply to Secretary Ministry of Education has claimed that the request made by the Secretary to replace the TEC with new members would create a negative impact on the credibility and transparency of the Government procurement procedure.

The letter further states, ‘For the procurement of free tabs for teachers and students in A Level classes, I have already appointed seven members to the TEC by letter dated March 3, 2017, and without giving any reasons you have made a request to null and void the appointed TEC.
‘The TEC had already followed the procurement guidelines and had called for tenders. Hence to remove the members of the TEC at this juncture, shall bring negative impact on the credibility and transparency of the Government procurement procedure. If you need to strengthen the TEC, he could consider to appoint more members to the committee. 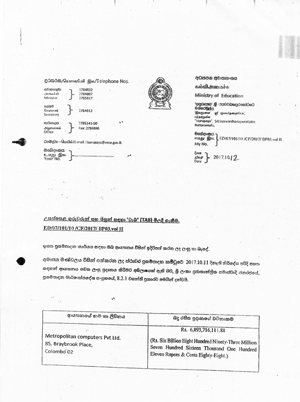 “The entire staff at the MoE hails the TEC for being very stern in recommending the best brand to be purchased for our future generation without putting their lives at risk. What was the reason for the Education Ministry to request from the Department of Public Finance to remove the TEC at a later stage instead of making the request before tenders were advertised?” sources alleged.

According to the sources, merely because there was a bidder who had quoted the lowest price, the TEC didn’t want to offer the tender as they didn’t comply with the FCC product certification requirement. “The bidder in question instead had submitted the FCC certification only after the tender was closed.

Initially this bidder submitted an incorrect FCC product certificate and referred to a model different from the one that was offered in the tender. Submitting another FCC product certification at the time the appeal was made after the tenders were closed violates the tender guidelines. No evaluation has been conducted on account of this bid being non responsive on the evaluation conducted initially and this particular brand doesn’t comply with the tender requirement,” sources added.

The sources further said it had come to light that most of the bidders had submitted the FCC declaration of conformity instead of a FCC product certification. If one logs on to the FCC website any FCC certified product could be verified. “Although the European certification and FCC product certification requirement was mentioned in the tender document, research has revealed that radio frequency (RF) radiation from personal computers and Tabs that aren’t certified pose serious health risks as these devices by nature are used for long hours in close proximity to the skin and most of the time is kept on the laps of users.

In such a backdrop what made the Education Ministry official to award the tender to the bidder that doesn’t have the FCC product certification,” sources queried.

The sources meanwhile accused the Telecommunications Regulatory Commission (TRC) of Sri Lanka for accepting European Certification (CE) or FCC to grant approval to import computer tabs, as it is questionable why the TRC has failed to stop the usage of non FCC product certificated electronic devises in the country. Deputy Director TRC by letter dated September 21, 2017 had stated that they accept either EC or FCC certification. 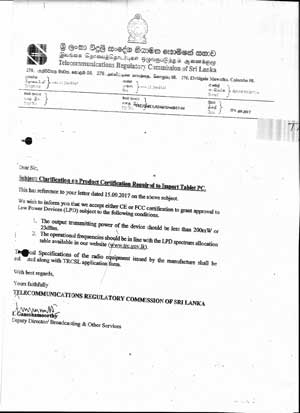 “Now the bidders claim the TRC accepts FCC or CE certifications. Although the TRC letter to the Education Ministry claims that they accept FCC and EC certification, TRC website clearly explains what the mandate of the TRC is. It says that although it is the regulatory body to manage and control the use of the radio frequency spectrum, they are not the regulator on health and safety standards.

The MoE can’t accept only the letter written to them by the TRC, but should know how to consider the health and safety of these devices as well,” sources claimed.
When contacted Managing Director Metropolitan Computers, Ivor Maharoof he declined to talked to this paper. “Sorry I can’t make any comment in this regard,” Maharoof said.