Under the initiative of the Ministry of Megapolis and Western Development and the Urban Development Authority, the Beira Lake Intervention Area Development Plan was inaugurated in Colombo yesterday.

The ministry aims to restore the lake and turn it into the most scenic asset of Colombo by 2035.

Having had a highly urbanised catchment of 448 hectares, the lake was used for a wide variety of purposes during the colonial era of the Portuguese and English and was used as a port for transporting goods within the city plus suburban cities for it is connected to many intricate canals. Even today the Beira Lake is a centre for residential, industrial, commercial, tourism and religious activities. However, at present pollution has led to the eutrophication of the lake.

The Chief Guest at the launch, Megapolis and Western Development Minister Patali Champika Ranawaka, said: “The development plan that we launched today, which we have termed the Beira Lake Intervention Area Development Plan, certainly represents a vital element in the master plan to develop the central business district of the Megapolis. This area had very much been a theatre of intense political and economic activity for many centuries and hence had very great significance.”

“On one hand a good part of the water body was reclaimed to accommodate the military, 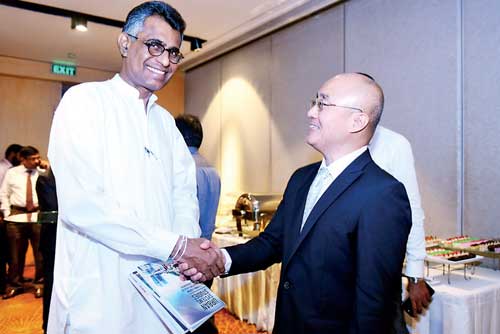 commercial and administrative facilities of this establishment. On the other, the banks of the northern Beira were turned into docks and the waters became anchoring yards for ships that carried goods into the island. The area was effectively made the logistic hub of the city. Nonetheless, during the subsequent phase of the expansion of the Port of Colombo the lake got relegated to a backyard facility,” he added.

The development plan hopes to clear away all nearby slum dwellings and control the chaos which prevails around the area and create a picturesque place for both locals and tourists. For this purpose, the project has been divided into five categories implemented under the guidance of the Centre for Liveable Cities Singapore.

The five categories are to fruitfully improve all land around the lake, control pollution around the lake, incorporate the safety of nature during the process of development, safeguard the lake and bring in suitable events for both local and foreign tourists to enjoy and focus on the livelihood of the people.

While 27 hectares of the Beira belong to the Sri Lanka Railway Department, 26 hectares belong to the warehouses. The majority of this area belongs to the Port Authority and a total of 20 hectares will be parted as open space. The open space will be assigned to shops, cafeterias, cinema halls, cycle paths and rented homes.

In 2016 the Beira Development Project was granted Rs. 1.35 billion by the Government out of which 384 houses were constructed under the Urban Renewal Program. The plan recommends creating a garden setting around the lake and a green promenade will be continued around it to grant the public easy access to the lake.

All the access roads will be developed with tree lines with a more spacious area for walking and cycling. The development of a multimodal transport hub is also being initiated at the fort area, creating a host of economic and social benefits. The development of a diverse, balanced and integrated transit system which provides satisfactory service coverage for people and freight transport is what the ministry is aiming to achieve.

“Our vision is to celebrate both the natural beauty and rich history of the Beira Lake and its surrounding areas. The area is therefore envisioned to be the crown jewel of Colombo and a major destination for locals, visitors and investors,” stated Urban Development Authority Planning Deputy Director Priyani Nawarathna.

The National Housing Development Authority at the helm of the Beira’s housing plan stressed that the housing area will be divided into residential, commercial and public zones, where the public zone will be primarily tourist-based. The project will therefore not only capture the interest of locals but also attract countless tourists.

“When I first came to Sri Lanka together with my Executive Director, we immediately saw the wonderful potential of the Beira Lake. You’ve come very far but we can do more and I can see the passion. We hope to continue to work with you and to share more ideas,” said Centre for Liveable Cities Fellow Michael Koh.