September exports grew 12.6%, surpassing the $ 1 billion mark for the third consecutive month, but the month also saw the trade deficit increase on higher fuel and rice imports as well as a dip in tourism and remittance earnings, the Central Bank said yesterday. 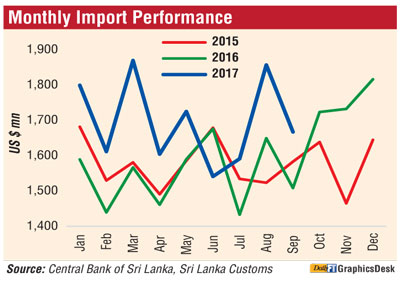 Despite the mixed performance, releasing the external sector report, the Central Bank pointed out reflecting continuous investor confidence, the financial account of the Balance of Payments (BOP) continued to strengthen during the month with higher foreign inflows to the Colombo Stock Exchange (CSE) and the government securities market. Subsequently, the overall balance recorded a surplus of $ 2 billion by end September 2017.

“The deficit in the trade balance widened in September 2017 while the cumulative trade deficit during the first nine months of 2017 also expanded when compared with the corresponding period of the previous year.

This was mainly due to the additional import expenditure incurred due to the prevailing drought condition in the country,” the Central Bank said. 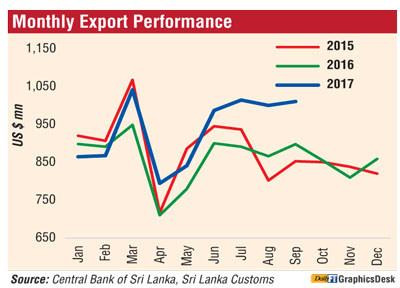 Earnings from exports which grew since March 2017 continued their increasing trend in September 2017 as well. This growth was mainly led by higher earnings from industrial exports owing to the increase in exports of textiles and garments as a result of improved garment exports to both the US and EU markets.

Meanwhile, earnings from agricultural exports continued to increase in September 2017 from the beginning of the year. This was due to the improved performance in tea, owing to higher prices in the international market and a marginal growth in export volumes. Earnings from spices also increased considerably due to the higher export volumes of pepper, cloves and cinnamon. Reflecting the positive impact of the removal of the ban on exports of fisheries products to the EU market and the restoration of the GSP+ facility, earnings from seafood exports increased considerably with a 153% year-on-year growth in exports to the EU market.

Further, base metals led by iron and steel, mineral products led by cement clinkers and building materials led by cement imports increased notably, reflecting higher demand by the construction sector. Meanwhile, expenditure on consumer goods imports declined owing to lower prices and volumes of sugar imports. However, following measures taken to fulfil the shortage of rice in the domestic market, expenditure on rice imports continued to increase in September 2017 adding around 497,889 metric tons so far during 2017 from 21,457 metric tons imported during the corresponding period of 2016.

Despite the slower than expected improvement in the current account, the financial account of the BOP was strengthened during September with continuous foreign inflows. Continuing the positive trend witnessed since March 2017, foreign investments to the government securities market recorded net inflows for the seventh consecutive month, reflecting positive investor sentiment.

In addition, long-term loans to the Government increased on a net basis during the first nine months of the year. Meanwhile, foreign investments in the CSE recorded a net outflow (including both secondary and primary market foreign exchange flows) during September, mainly due to a one-off transaction of a Sri Lankan conglomerate acquiring the foreign stake of a company operating in Sri Lanka.

However, on a cumulative basis, foreign investments in the CSE recorded a substantially high net inflow during the first nine months of 2017 in comparison to the net outflow recorded during the corresponding period of 2016.

Remittances continued to be a concern with a 16.7% drop to $ 481 million in September bringing the year to date figure down by 7.4% to $ 4.9 billion from a year earlier.

“Slower growth in economic activities and adverse geopolitical conditions prevailing in the Middle Eastern region continued to have a negative impact on workers’ remittances. As such, workers’ remittances declined significantly in September 2017. Following the same trend, workers’ remittances recorded a decline during the first nine months of 2017, in comparison to the corresponding period of 2016,” the bank said.