Aloysius had spoken a total of 227 times to Minister Sujeewa Senasinghe, 18 times with Dayasiri Jayasekara, 176 times with Harshana Rajakaruna and 73 time of Hector Appuhamy during periods commencing January 2015.

Cabinet Minister Dayasiri Jayasekara had also been in communication with Arjun Aloysius with 18 calls going to and from him with Aloysius in total, with two calls during the period of the COPE hearings. The communications with Jayasekara had commenced on July 10, 2015.

The second Committee of Public Enterprise (COPE) was established on May 6, 2016 to investigate the controversial Bond Issuance.

The evidence presented by the Attorney General revealed that Arjun Aloyisus had also been in constant contact with MP’s Hector Appuhamy, and Harshana Rajakaruna, whilst they were sitting in the COPE committee investigating the Bond Issuance.

The other MP names were highlighted in a forensic report presented by the Criminal Investigations Department during yesterday’s hearing of the Bond Commission.

The other MP Ajith P. Perera who had only two calls (one incoming and one outgoing), between him and Aloysius.

Senasinghe was appointed midway during the proceedings, after the resignation of UNP MP M. Welakumar on July 8, 2017.

They include calls on other platforms such as Whatsapp and Viber.

UNP MP Harshana Rajakaruna who was also a member of the COPE had been in contact with Aloysius since February 2015. There were a total of 176 calls between each other and 18 during the period of the COPE hearings.

MP Hector Appuhamy had taken and received a total of 73 calls from mid July 2016 to mid June 2017 with a total of 23 calls during the period of COPE sittings, evidence revealed.

The evidence was through sub- inspector Yasanka Jayasinghe of the Criminal Investigations Department who had forensically examined all the relevant data.

Counsel for Former Central Bank Governor Arjuna Mahendran vehemently objected to the admitting of the evidence initially. The objections were overruled with the Commissioner ordering written submissions to be tendered within seven days to the Commission.

ASG Yasantha Kodagoda was to later remark following the revelations that “It is exactly knowing all of this that they objected to it”.

Jayasinghe’s evidence was the only evidence led throughout the day, which highlighted many calls to and from between Aloysius, Mahendran and other directly connected parties to the issuance of Bonds.

The evidence was led out following the tabling of a 127 page forensic report in which Jayasinghe explained the method of extracting data. All telecom service providers had complied with the orders of the Commission and provided data during the time period commencing January 1, 2017.

Jayasinghe said that Dialog Axiata had not given the full report due to technical difficulties, Jayasinghe said, but had complied and provided all data that was within their reach. Jayasinghe said that the Telecom giant had requested a further 120 days to provide all the relevant data pertaining to the mobile phones Aloysius and Mahendran.

The Attorney Generals Department drew a nexus between the workings of the Central Bank, the other Banks in the Treasury Bond Market, and Perpetual Treasuries. 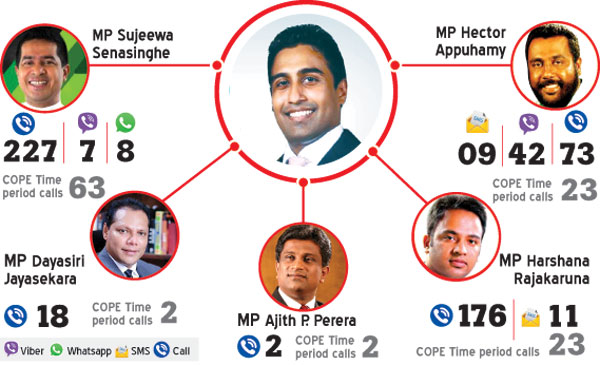