Seven people lost their lives this week as a result of reckless driving when a private bus plying from Colombo to Jaffna overturned in the Madurankuliya area earlier this week. While reckless driving is one main reason for accidents, especially among long distance buses, in the first week of this month alone six serious bus accidents caused by reckless driving were reported killing 11 and injuring 61 individuals.

The statistics depict the gravity of the issue with experts saying reckless driving among public transport services as they duel it out to gather passengers has increased in the recent past. As bus owners now attempt to blame the lack of timetables for a large number of accidents however with new GPS tracking technology to be introduced for buses by the National Transport Commission (NTC) shortly, reckless driving is expected to decrease drastically as bus operators will be heavily penalized for any infractions. 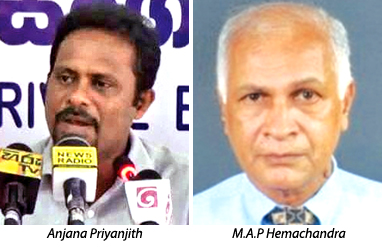 Earlier this week the accident between a private bus and a three-wheeler which killed seven passengers of the bus and injured 42 more along the Colombo – Puttalam Road shocked the general public. While accidents are a common occurrence nevertheless the severity of the accident highlighted the issue of dangerous driving as pictures of an overturned and completely destroyed bus splashed across televisions around the country.

According to the Police, the private bus NB 8501 had attempted to overtake a three-wheeler travelling in the same direction in the Madurankuliya area on Monday around 8 am when it had struck the three-wheeler from behind. Police say witness statements claim that the bus had been travelling around 100 Kmph at the time of the accident and had been chasing a Sri Lanka Transport Board Bus (SLTB) in an attempt to catch up with it. The bus driver had lost control of the vehicle and veered off course colliding with a culvert on the road before it overturned. The resulting scene was one of chaos with many of the injured being rushed to the Puttalam, Chilaw and Mundalama Hospitals.

According to the Police, the fatal accident was a direct result of dangerous and reckless driving on the part of the private bus driver. While he was later arrested, it has now been revealed that the driver had several cases pending against him for various road and traffic law violations.

Officials from the Traffic Police claim that reckless driving has become a serious issue in the public transport system with a large number of accidents are now being caused due to the negligence of the driver. While many engage in competition with other busses, other distractions such as the use of mobile phones and alcohol use are common causes for accidents that put their passengers at serious risk. According to the statistics of the Sri Lanka, Traffic Police bus accidents have resulted in 167 fatalities this year up to date. 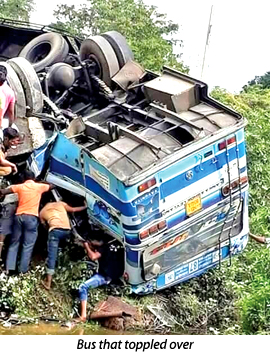 But speaking to the Sunday Observer General Secretary of the All Ceylon Private Bus Association Anjana Priyanjith laid the blame squarely on the National Transport Commission (NTC) for the non-implementation of proper scientific bus timetables. “It is the lack of scientific and combined bus timetables for buses that are causing all these accidents,” he said adding that this has resulted in competition between the SLTB and private bus operators. According to him most SLTB and Private buses depart their bus terminals simultaneously to the same destination which results in a battle of sorts in their bid to reach the destination on time while also picking up most of the passengers along the route.

“The NTC must accept the blame for the rising number of accidents,” Priyanjith said explaining that the bus unions have been requesting combined timetables for over eight years but to no avail. When questioned regarding the actions of the bus driver suspected to have caused the Madurankuliya accident Priyanjith said the union has no wish to exonerate him from his fault. “He must take responsibility for the loss of lives,” he said also pointing out the need for a training facility for private bus operators. While SLTB staff is given a rigorous training private bus operators do not receive any training which may also be a cause for the number of accidents seen. “We have requested for a training centre but governments have taken no interested in this regard,” Priyanjith said.

While emphasizing the need for scientific bus timetables Chairman of the National Transport Commission M.A.P Hemachandra admitted that a majority of accidents are caused by competition between the buses. “Competition is caused due to traffic in city areas which makes them drive dangerously in a bid to reach their destination according to the timetable” he explained adding that SLTB and Private buses travelling to the same destination has also given rise to the issue. However, with Minister of Media and Finance Mangala Samaraweera addressing this issue in his 2018 Budget speech Hemachandra said the lack of scientific and combined timetables for SLTB and Private buses will be resolved shortly.

The NTC has also been taking firm action against road and traffic law violators based on complaints received by the general public. This year the NTC has received 3309 public complaints against errant public bus transport operators. According to Hemachandra, each complaint is investigated and strict action is taken if the drivers are found to be guilty of any infractions. “Strict action will be taken against the driver of the Madurankuliya accident,” Hemachandra said adding that the driver will most probably lose his licence issued by the NTC allowing him to drive long distance public transport buses.

Meanwhile, the introduction of GPS tracking by the NTC for all buses is now also well underway. According to Hemachandra, this new introduction is expected to reduce reckless driving significantly as all long-distance buses will be monitored by a control room. “This will ensure they are not speeding or driving dangerously,” he said adding that a new fines system will also be put in place along with the new system. While the bus operators are expected to fit their vehicles with GPS tracking devices Hemachandra said they have now been given deadlines to do the needful. “We are also now in the process of hiring staff for the control room,” he said.

According to Hemachandra Air conditioned intercity buses are expected to fit GPS tracking systems by December 31 while other long-distance buses must adhere to the new rule by July 31 next year. “With buses being monitored at all times we believe this will contribute to the reduction of accidents drastically,” he said. However with bus operators feeling unfavorable regarding the new move the success of its implementation is a fact yet to be seen.