He told a media briefing that the Budget 2018 had suggested calculating levies of vehicles on a unit duty basis except for Freezer Truck vehicles.

“The prices of Toyota Axio, Toyota Aqua, Honda Vezel and Honda Grace will increase by Rs.750, 000 as a result of the hike in vehicle import excise duty. On the other hand, prices of Suzuki Wagon R, Toyota CH-R, Toyota Vitz 1000 CC and Nissan Leaf will come down.” Merinchige said.

Meanwhile, the association’s secretary Keerthi Gunawardana said the budget had proposed banning the import of vehicles which do not have air bags, anti-locking breaking system/ABS, and three point Seat Belt with effect from January 1, 2018. 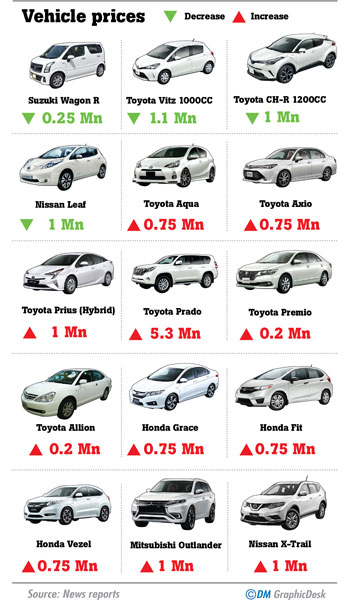