Confucius say: “Even if people be made to follow right path, how they be made to understand it?”

The old codger saw the deficiencies of democracy ages ago. Hence there is good reason why my previous columns dealt with unpredictability (17 September) and instability (24 September). We are nearing the end of 2017 and no one knows whether there will be a new constitution, whether the Executive Presidency will be retained and what the electoral system will be. The only two people (Ranil and Sirisena) who may have an inkling are tight lipped, or to be frank, I think they don’t know either. The options are manifold: (a) constitution/ no constitution, (b) executive/ semi-executive/ non-executive presidency, (c) candidates Maithri (who knows?), Ranil, Gota (dump US citizenship?), or a dark horse. If you multiply out the options, on paper there are twenty-four. Conversation among Colombo’s whisky sipping chattering classes savours these themes; lesser hoi polloi relish the topic relaxing on poya day playing asking-hitting (booruwa). The deluge of options is too much for one piece; so today’s offering is limited to just two matters; (a) assume executive presidency is retained in 2020; (b) parliamentary election outcome under any system.

These musings were kicked off by Rajan Philips’ much read and discussed column three weeks ago (“The Hounds of Law Keep the UNP and the Rajapaksas Nervous and Concerned” Sunday Island 10 September). I am tempted to extend his offering and speculate: “Has Maithri loosened the leash on commissions of inquiry, state prosecutors and commercial-crimes cops and turn the screws on both Ranil and the Paksas?” The first uncertainty is could Maithri be playing this game at all. Probably not, but if ‘yes’ there has to be a motive deeper than good governance. Were he to throw Ranil to the wolves and lose the UNP, how can he govern? Say he invites the Paksa-SLFP into his fold and say they turn up at his doorstep, he will still be short of a parliamentary majority. Perish the thought of the TNA, Muslim parties or JVP playing ball. So if he screws Ranil and the UNP, his game must to be to dissolve parliament at the earliest that the constitution permits. Rather, I should state it the other way; he will bide his time till then and roast Ranil and the UNP after that. As I said I am unable to guess Maithi’s plan, but Confucius say “A man cannot conceal himself for too long”. 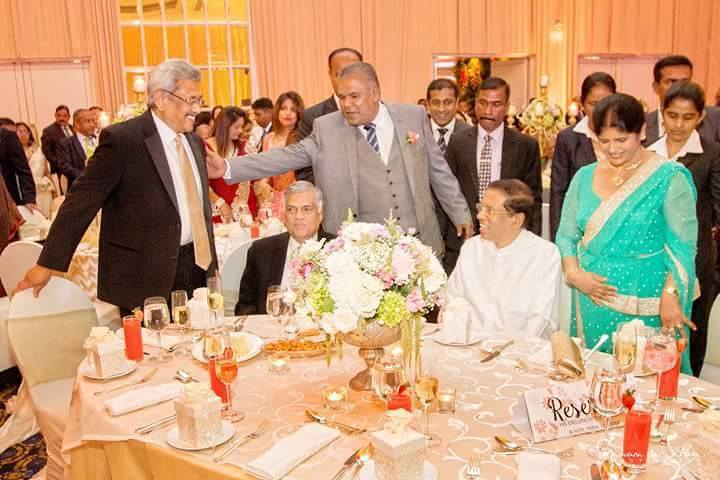 The fire-Ranil gambit is contingent on Maithri having made up his mind to scuttle the new constitution – anodyne amendments excepted. He has already shown himself a false friend of the constitution hence he faces no psychological impediment, but he will fall foul of everybody to whom he gave false promises – that is the whole nation except the Paksa-SLFP and now his SLFP. He will also be putting his neck in a Paksa noose; dare he? Surely he is too cunning to play suicide games. Either way, now or in a year, the fire-Ranil gambit seems (to me) to be a dead end for Maithri; but let’s not write it off entirely; there may be dervish options I cannot fathom (unknown-unknowns).

Let’s move on and talk about presidential options if the executive presidency is not abolished by 2020. I will try to put aversions and preferences aside and clinically diagnose possible outcomes. I am making an effort to be as objective as I can in the context of prevailing uncertainties in evaluating likely outcomes. Confucius say “The cautious seldom err”.

Ok then, there is the three candidate case and the two candidate cases (one of the tree backs the third). A three cornered fight will be a walk over for Ranil who is confident of a 28% to 30% minority-vote – leeway to allow for Sinhala Catholic-Christian fluidity. Then even a quarter of the Sinhala-Buddhist vote sees him in the high 40s while the other two battle to divide say 55%. It will be difficult for Gota to press Maithri’s vote below 10%, though the latter will be third in a three-cornered contest. This case was easy to forecast (known-known).

More interesting are the possible one-to-one combats; Ranil backed by Maithri versus Gota; Maithri sponsored by Ranil against Gota; and option three, Gota with Maithri versus Ranil. I insist Gota cannot do better than Mahinda-2015 (inability to abuse state power and no minority support). To my numerically-challenged pseudo-Marxist critics I say, this is true arithmetically, algebraically or even if you have the aptitude for the vector calculus. It’s a known-known; Confucius say: “Those who know nothing never risk being misunderstood”.

A repeat of the 2015 arrangement won’t go down well with the UNP. I am a cynic, I think Maithri will like it, but it will be ‘no-no’ for the UNP base. Maithri as a ceremonial token is a non-issue, so no more about that. In any case this is irrelevant to the ‘Executive-Presidency-retained’ case.

The final challenging option is if Maithri cuts loose from the Ranil-Chandrika-JVP-JHU umbilical cord and throws his weight behind a unified-SLFP sponsored candidate Gota. Then the political scenario will look like this. The UNP is tainted by corruption, Ranil though not personally dishonest tarnished by blunders and bad judgement in appointments, the new constitution not enacted, and the economy in poor shape. Against this backdrop can Ranil pull it off against Gota?

I said clinical objectivity and not forgetting this, I think the 30% minority-community handicap that anyone starts off with against Gota, cannot be neutralised. If a strong non-Paksa, specifically not-Gota, SLFP candidates is found he/she will do better. Something of a known-unknown.  Juggling a discredited crony Tamil ex-diplomat, a cross-decorated Judas and an unheard of Muslim nobody on the Eliya platform will not seduce minority voters. Anecdotal feedback suggests that this caper on the Eliya stage has been counterproductive because the exhibits were implausible.

How will the various combinations fare in the tussle for seats in parliament? If there is a change to the electoral style (say 150 first-past-the-post constituencies and 75 proportional) it will be good nationally, but that matter is different from what I wish to say next. Whatever the alternatives in format and even if there is no change in format and the current all-proportional system is retained, it will not make a significant difference to the number of seats that the big three (UNP, Paksa-SLFP and Maithri-SLFP) take home in a three-cornered fight. Furthermore, conventional logic says the UNP will be at an advantage in a three-cornered and I can’t think of why conventional logic could be incorrect. If a tactical voting agreement materialises between the UNP and Maithri-SLFP it will leave the Paksa-SLFP led JO well short of a parliamentary majority. Let me repeat that these forecasts hold irrespective of whether the electoral architecture is changed or not.

The case where Maithri-SLFP and Pakksa-SLFP unify and take on the UNP is clearly the more complex case and my judgement is that the UNP will come off second best in this case. Mostly the reason is that Ranil and the UNP will be seen to have failed in controlling corruption, prosecuting previous corruption and most important the blame for the failure on the economic front will be laid squarely on Ranil’s shoulders; and that’s fair since the President has, most of the time, let the Prime Minister take charge of economic issues.

This brings me to a curious matter. I maintain that Gota is a dead duck for the presidency, but a unified SLFP (Maithri plus Paksa wings) will collect more seats in Sinhalese areas than the UNP. The minority vote in the North and East will go to Tamil and Muslim parties. Thus the opposition is better off jettisoning the Executive Presidency, which it is unlikely to secure, and supporting a new constitution with or without revised electoral architecture. The idiocy of the opposition, for which I am thankful, is magnified by its inability to comprehend that it is better off NOT salivating for an unreachable executive presidency and instead focussing on parliament.

The reason for the idiocy is obvious enough. It is so obsessed with racism that it sees a Tiger behind every palmyra plant and in an executive presidency it sees a Sinhala autocrat willing to subdue every form of Tamil dissent. Hence it cuts its nose to spite its face. Sun Tse say: “Never interrupt enemy when he is making mistake” – Art of War. So me happy if they keep making mistake.

Finally a few words about Burman religious bigotry and the massacre of Muslims; another example of narrow chauvinism. Amnesty released satellite images of an “orchestrated campaign” to burn Rohingya villages and evidence of security forces pushing Muslims out of the country. 400,000 Rohingya have fled to Bangladesh since violence began last month. They have long been persecuted in Burma as “illegal immigrants” (remember upcountry Tamils were kala-thonis till recently); denied citizenship though they have lived in Burma for generations, and their villages emptied (Sirima-Shastri Pact). Confucius reminds: “Before embarking on journey of revenge, dig two graves”.

The majority Burman population has no sympathy for Rohingyas, calls the Muslims terrorists (Liberation Tigers of Islamic Rohinyga!) and wants them evicted from the country. The army claims it is fighting terrorists, denies targeting civilians and says jihadists infiltrated communities and burnt down the villages. The BBC’s Jonathan Head who was in a group of reporters chaperoned by the army reported that villagers uniformly stated that rape and burnings were not done by the army; but officers always monitored the interviews. (Confucius would have said: “I didn’t say all this shit”).

Burma is going the way of Lanka and Aung San Su Ki, (learning from Sirisena?) is a shield against criticism of the army. Her immense moral authority could have impacted public opinion but she has chosen not to use it. She is afraid of an angry reaction from Buddhist nationalists just like our leaders ever since the 1950s. Maybe she fears the military may step in. Buddhist will support a coup if she angers them. Confucius say:  “To see the right and not to do it is cowardice”.