Stressing the need to allow the private sector to drive the economy, Special Assignments Minister Sarath Amunugama yesterday said that the communist-style State that countries from the South Asian region inherited from the colonial era should be abandoned in order to move forward.

Speaking at the inauguration of the CPA Regional Management Conference 2017 organised by the Institute of Certified Professional Managers, the Minister said that the time had come to transform the system to address the needs of economies and the issues faced.

Stressing the need for the administration of the country to be proactive decision-makers, the Minister said that it was time to make true the pledge given in each Budget Speech stating that the “private sector is the engine of growth.”

Amunugama highlighted the need to take strong administrative decisions to reap economic benefits. Although all countries in the region are on a growth path, the countries have failed to take proper decisions at the correct time to maximise development opportunities, he asserted.

At the heart of that crisis is management, Amunugama said, adding that the countries needed to re-examine if their natural resources were being properly managed.

“It is very important that compared to other countries in the world that we get our act together and certainly improve administrative performance,” Amunugama stressed.

The Minister also said that the administrative layers of the countries in the region had not been able to advance as needed in modern times due to their inability to adopt information technology.

“Most of the leaders in our administration do not gain new information,” he said, adding that a leader should be open to access new information in order to transform the economy.

CPA President Prof. Lakshman Watawala also highlighted the need for the management layer of the country to drive economic growth.

“The current development drive will benefit from good management,” he said, underscoring the need for institutions to develop the requisite skills.

Delivering the keynote address, Director in charge of the Indian Institute of Management, Ahmedabad India, Prof. Errol D’Souza, spoke of the need for leaders of organisations to focus on long-term gains in order to navigate their 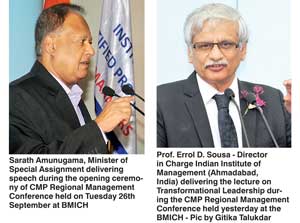 organisations towards success in a volatile economic environment.

“In recent volatile times, organisations ask to deliver market results. Then you are looking at short-term profits, then you are not looking at communicating with your people. You will only say what you want them to do. It is a top-down approach. That alienates the leaders and you are losing out on local information that people in your organisation are able to observe,” he said.

“Therefore, pushed by short-term profit, you will never be a good leader.”

“You will try to understand the constraints faced and remove them. Information on the ground level of the organisation and competition will be shared. Crystallising this input will lead to valuable inputs to transform the organisation.”

Speaking on the need for delegation by the leaders of the organisation, D’Souza explained that the challenge of cooperate governance is how the monitoring process within corporates could be conducted.

“One of the paradoxes of leadership is that you have to let go and you have to trust that something good will happen,” he said.

“In the organisations that seem to do well, I have seen that delegation has taken place, trust has been given, a more long-term strategy approach is taken, there is lot of dialogue that takes place within the organisation and as a consequence firms benefit in the long run, even though in the short run they may not get the benefit of high profit,” he said.