According to data from the London-based company, almost a quarter of malware on mobile devices originates from xxx-rated video websites.

“Smartphone operating systems, especially Android, are not as secure as desktops, there are many vulnerabilities that can be easily exploited by hackers,” Wandera warns.

And it’s not just malware that users should be worried about.

Adult video sites are typically the least reliable when it comes to protecting user information and data, it has warned. 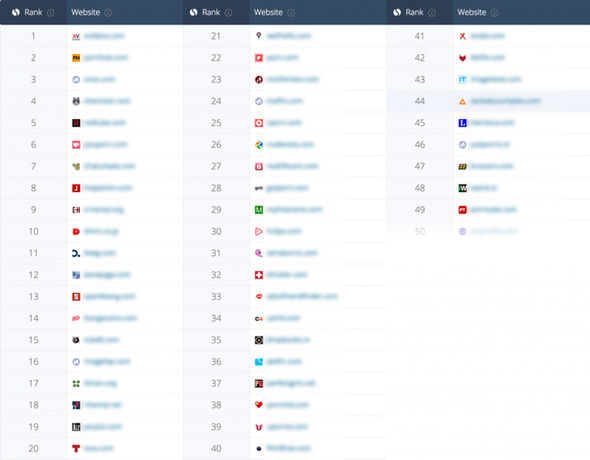 WANDERA: 40 out of the top 50 adult sites were exposed at the time of research

According to Wandera, 40 out of the top 50 adult sites have been exposed.Writing on the official blog, Wandera Content Marketing lead Liarna La Porta said: “Pornography and other adult content categories are notorious for lax handling of PII [Personally Identifiable Information].

“A year previously, the controversial extra-marital dating app Ashley Madison was hacked, revealing the PII of every single user in its database.”

This information can be used as leverage to blackmail users.

“As we saw with the Ashley Madison hack, if this information was hacked and leaked, there could be serious consequences.

“Ordinary people could be blackmailed for doing something that is perfectly legal.

“Hackers could also target celebrities and politicians for blackmail purposes or to sell the information on to the media.”

It’s always worth taking the time to create a unique password for each of your online accounts.For example, take the first letter of each word in your favourite song lyric, phrase or poem – and use those letters, which appear like a random jumble, as your password.A password manager is another way to generate and securely store unique passwords with letters, symbols and numbers.

The news follows the publication of the usernames, hashed-out passwords, dates of birth, IP addresses, and browsing histories of  180,000 users of UK site The Candid Board.

The details were shared online after a major security breach.

The Candid Board is a seedy site that posts “upskirt” pictures of women – i.e. photos taken up women’s skirts in public without their knowledge or consent.

Subscriptions to the shady site cost $19.99 a month.

Amongst the details details were 19 government email addresses and 68 military accounts.