Humaid, son of Mohamed who championed the campaign to raise funds for a PET scanner for the Maharagama Cancer Hospital passed away on September 12, 2017. Mohamed still echoes the words of his son, one day at the Apeksha Hospital, on experiencing the sufferings undergone by cancer patients in Sri Lanka, “Dada why cannot we donate a PET scanner to Apeksha Hospital so everybody would benefit?” From then on, inspired by his son’s thoughts, Mohamed dedicated himself to fulfil it to ensure that cancer patients in Sri Lanka could live with renewed hope and a better quality of life. 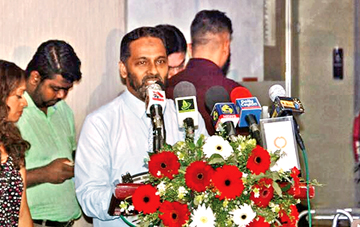 The Sunday Observer in an interview with Tharique Jamaldeen, Treasurer, Fight Cancer Team, Sri Lanka (FCT) on the current status of the PET scanner and the PET building for Apeksha Hospital, wishes to share the following with its readers.

Jamaldeen says, since the funds were collected to a Government Account, knowingly or unknowingly the authorities commenced the normal process of calling for tenders to procure the PET machine. “Later, we learnt, being public funds the scanner could have been purchased straight away without calling for tenders.

It was too late when we realised this, and now almost one and a half years has elapsed. However, with the support of the FCT members, it was brought to the notice of the President, and he intervened to expedite the matter. The FCT’s intention was to commence the PET scan operation in Humaid’s presence, unfortunately however, Humaid left us and the matter is yet pending,” he said.

“The FCT was founded to help cancer patients, especially, the poor who seek treatment at Apeksha, Maharagama. The concept was a dream of Humaid, son of M.S.H. Mohamed, Chairman N M Travels & Tours (Pvt) Ltd, and the Kadhija Foundation. Four years ago, Humaid was diagnosed with cancer and treated in India for almost three years. There being no progress, Mohamed decided to admit his son to Apeksha in Sri Lanka. Having gained experience in India in locating the spread of the decease through a PET scanner they wanted to do the same here. Surprisingly they found no PET scanner in the only specialized Cancer Hospital in Sri Lanka. They were asked to get a scan from a Private Hospital which cost LKR 150,000/- per scan, which they had to undergo about four times,” he said.

Jamaldeen went on to say, in order to carry out his son’s wishes Mohamed gathered a group through whats-app from his known circle to begin the campaign to collect LKR 200M. “It was the cost of the best and latest technology PET to be donated to Apeksha. He commenced the campaign in January 2016 and collected LKR 250M by end March 2016. The funds were deposited in a Government Account maintained at the BOC Maharagama. I am proud to be an initial member of the FTC group comprising 140 members. Many people voluntarily joined this worthy cause,” he said.

Jamaldeen recounted, “We had several meetings with the Minister of Health, Dr. Rajitha Senarathne, the previous and present Directors General and Secretary, requesting that the matter be expedited. Even with funds available nothing is happening. The matter is pending despite even the President’s instructions. Had the money been deposited in a private account by now the matter would have been completed and Humaid would have seen his dream come true before his departure. In order to be transparent and gain public confidence we deposited the donation in a Government Account which apparently has failed to reap the intended benefit. It is regrettable indeed.”

According to Jamaldeen their target was to commence operations by November 30, 2017 and complete the PET building by December 31, 2017. “To achieve this we should have opened the Letter of Credit (LC) in August 2017 since it needs three to four months to complete assembling the scanner and delivery. The LC has not been opened yet.

Therefore our target dates will not be met. We have to leave a minimum gap of three to four months to get the PET delivered, installed and for initial supervision,” he said.

“Simultaneously we need to get down the FDG (the substance) used on patients for the scanning. This too is a tedious process and needs to be imported instantly, and used for a minimum number at a given time. At present, the funds plus the profits earned by placing it in Government Bills is LKR 300M. We intend investing the full amount on the PET and the remaining for FDG which would be sufficient for at least a year.

The operators would have to be sent abroad for training by Siemens Company, which should be carried out concurrently with the opening of the LC.

Hence, we hope that by the time the PET scanner is delivered, we would have well trained operators from day one,” he said.

Sources from the Ministry of Health say that the agreement was signed with all terms and conditions stipulated for the importation of the PET, including installation payment, plus training. “The next step is to open the LC,” says the Health Ministry official.