Representatives of key industries yesterday presented their main proposals for consideration at the 2018 pre- Budget forum organised by the Daily FT and the Colombo University MBA Alumni Association with Standard Chartered Bank as the Strategic Partner.

Given below are excerpts of their presentations and key proposals. 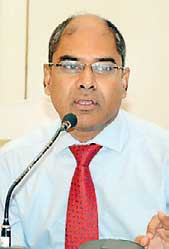 If you take the education sector, especially schools, Sri Lanka has about 10,000 schools in the state sector and we used to have a very strong private sector, such as the church-linked schools, and the new emerging sector is the international schools and the private higher education institutions.

According to the International Schools of Sri Lanka, which I founded and has the best established 24 schools, we have over 40,000 students. Of the non-members, I’m sure there are about another 200 schools. So our sector is substantial and in fact we are now bigger than the private schools where numbers are concerned.

An important thing to remember is that students who attend international schools are not a burden to the Government at all; the Government does not spend one cent on them. Where the institutions are concerned everything is a cost to us, including land and buildings. Traditional private schools have taken many decades to get to this stage but we have to do this within our means.

If the Government wants to attract professionals to return, encourage consultants to be based here then they will look for schools like ours that follow the international curriculum. How the Government should look at this sector is to promote it as a hub, we have great potential. If Malaysia could do it, I think at least in South Asia we should have the possibility to do this. 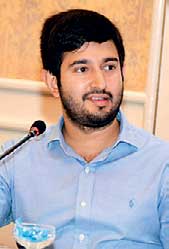 The tea industry has been facing challenging times. On one hand the unrest in key markets such as the Middle East has resulted in reduced volumes and on the other adverse weather conditions at home have impacted production. Unfortunately we can’t always pass on the increased costs to consumers, especially in these lower to middle income countries, which reduces our margins.

One thing I would like to address as an industry is we pay Rs. 3.50 per kilo of exported tea as a Ceylon Tea promotion levy. This is a fantastic idea if used wisely but so far about Rs. 6 billion has been kept in a fund and is in danger of being used as a political tool. Ideally we should use this to give back to the tea industry.  Sri Lanka used to be the third largest tea producer in the world but has now slipped to fourth place and it is just a matter of time before we slip to the fifth slot. The industry employs about one million people and is a crucial employment generator.

As a company that is taking its brand to international customers, we would like to draw attention to that process. We are creating our own export channels by taking our brand out there and investing in it and building our brand for Sri Lanka. Support in doing that in any way would really help, especially with cost.

The underlying theme here is that we are trying to build a prosperous society. Prosperity comes from earning more money and also investing and saving it better. I decided to take the approach of talking about capital market development from the aspect of creating an entrepreneur’s paradise. I think in terms of better funding for them and generating investment there is greater opportunity.

In addition, about 25% of our population is over the age of 55 and so savings and investment becomes a very important part of how we maintain prosperity. 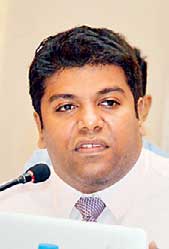 Primary concentration of improving entrepreneurship by improving access to funding, access to markets and reducing cost of failure. Funding challenges remain and tax systems are not very positive of start-ups and the challenges they face. We also need to look at alternative types of funding such as crowd funding but again the legislation needs to be changed around crowd funding.

We in the ecommerce industry have seen this increasing of single packages that are coming into the country through Alibaba, eBay and other websites. Initially we thought this was small but it’s almost like products raining into the country and its going undetected because they arrive directly on to the doorstop.

This means local traders in Pettah have to compete with eBay, so we have to control this, in my view at the post office level for it to be fair trade and improve commerce in a competitive way. 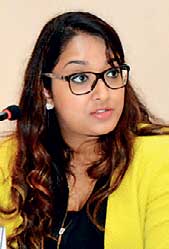 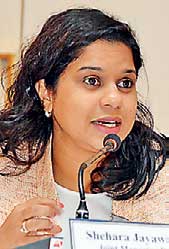 With introduction of NBT Act want clarity of shipping and related services. If this 2% on the turnover is brought in it will act as a deterrent. 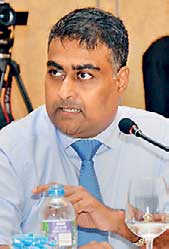 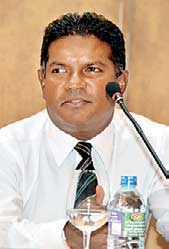 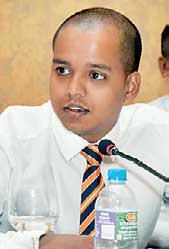 As a developing country we need mobility to grow and with new roads and highways coming up this sector has become very important. 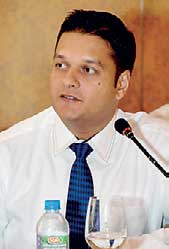 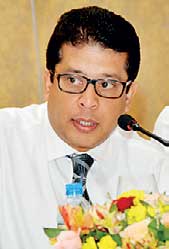 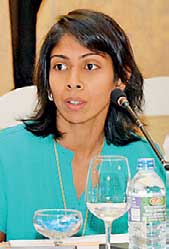 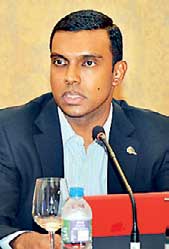 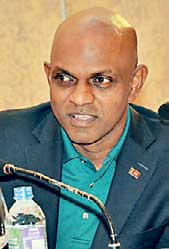 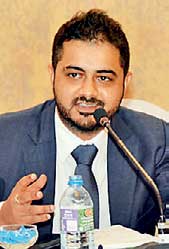 Digitalisation is very important and has to be a fundamental part of the Government’s vision. This could change everything and all sectors can be revolutionised because what we require now is speed. Create a Government portal that would open digitalisation to the consumers and public. Have a clean slate plan for education, police or anything you can name. In places like Bali people are flying in from around the world to work, we can create such ecosystems here as well by bringing this new youth, which would give exponential growth. 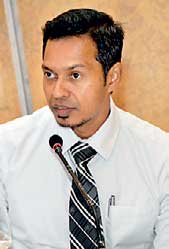 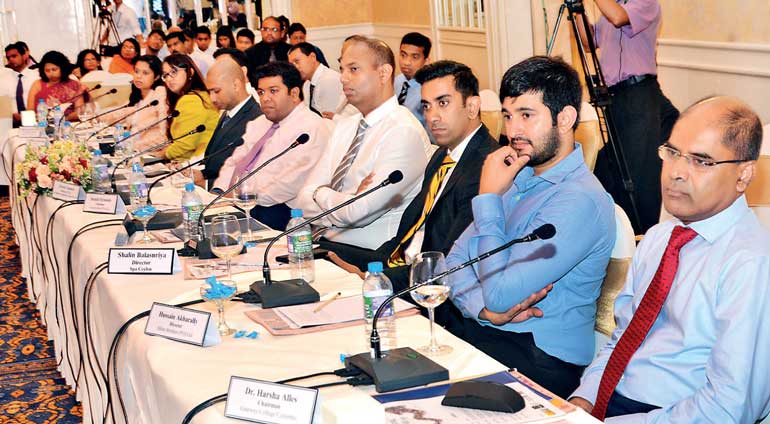 Taking on board proposals from the private sector, Finance Minister Mangala Samaraweera and State Minister of Finance Eran Wickramaratne yesterday acknowledged concerns and growth plans from companies and pledged to continue engagement on key points.

Speaking at the 2018 pre- Budget forum organised by the Daily FT and the Colombo University MBA Alumni Association, with Standard Chartered Bank serving as the Strategic Partner, State Minister of Finance Eran Wickramaratne responded candidly to the proposals and challenges presented by the private sector. In relation to requests for tax concessions and exemptions, he emphasised that the Government remains committed to maintaining the stipulations in the latest Inland Revenue Act.

“We have only one tax rate and that is 28%. The Bill is an effort to go into a more rules-based system rather than having to sit outside Mangala Samaraweera’s office. This is the change. A concessionary rate of 14% is applied because there are no zeros in the system and therefore this is the lowest rate. We have a few sectors such as agriculture, exports and education at 14% and we can argue why some are in it and others are not.  But it is a debate and it has been settled in this particular way.”

Capital investment allowance is one way forward, he suggested, that would allow for the recovery of investment. He also said that regarding tea, Sri Lanka has a long-term problem that would need greater attention and deeper policies but acknowledged the Government does not want to see the industry deteriorate further.

However, he noted that concerns over Cess would be addressed, and the discussion had already begun. On trademark costs of registration, the State Minister called for a note that would be further explored by the ministry.

“We fully take on board the issue of state-owned enterprises (SOEs). Here again you mentioned the banks and banks are capital short. So there is no way forward apart from raising capital and this is essential for growth. If private banks raise capital and expand then the state banks will inevitably lose market share. If they are to compete, the state banks need to raise capital. The Government Budget is constrained and so will not be able invest in State banks. So please help to get this message across. One way is to focus on their core businesses,” he said, predicting that the local sector will adjust along international trends.

He conceded that legislation would take time for startups, digitisation, access to payment systems, booking platforms and incubation labs but polices for all these are being considered by the Government. “It’s on our list because we are very keen to levy taxes,” he said, eliciting laughter from the audience. Discussions on bankruptcy laws have also resulted in a “white paper” and the Finance Ministry will get involved to see that it is going in the right direction.

On real estate he acknowledged industry concerns but insisted that as the Central Bank is an independent institution the Government could not dictate what it could or could not say.

“If the Central Bank is making statements then that is because they have reason to do so. We have a responsibility towards the public and we cannot let a situation like what happened in 2008 and 2009 or in Malaysia happen again and then later yell at institutions for not letting their message be known. I, as a part of the Government, may also not like some of the things that are said but I need to say that in defence of the statement made,” he stressed.

Tourism remains a favoured sector, Wickramaratne assured, noting that the country continues to be dependent on its revenue but said debates on Airbnb and other booking platforms need to be within the industry and once a consensus was reached, should tell the Government what steps to take. The Government would look to “creatively tax” booking platforms.

“I believe we are all aware of the precarious state of the country’s public finances, which this Government has inherited. But things are looking up; the deficit is narrowing, the tax to GDP ratio is reducing, recent regulation has been passed to broaden the tax net, reserves have improved and several high-profile PPPs are underway. We can expect key FTAs over the next few months that will unleash a faster pace of growth.”

“The time is now to build a strong working partnership between the private and public sector so that in all aspects the economy and society can participate in the improving trend. This will require significant give-and-take with dialogue and genuine trust between all parties. The country’s annual Budget can be that instrument to engender improved relations in many sectors of this economy. I believe we can all agree that the past two Budget processes created much expectation but also disappointed, possibly due to their desire to encompass too much change all at once. My recommendation would be to set our sights on fewer key issues and then ride that sense of achievement into the following years.”

He noted that economists projected Sri Lanka to grow in the New Year with stronger macroeconomic indicators including moderate inflation and reduction of private sector credit growth to 15% along with stronger reserves and better fiscal consolidation. This will over time reduce debt, he said, but acknowledged that in the short term Sri Lanka would have to tackle wide trade deficits and work to attract investment. He also called on the private sector to be more aware of the developments internationally and regionally as well as work to improve connections so that it is better positioned to deal with the challenges and opportunities available.