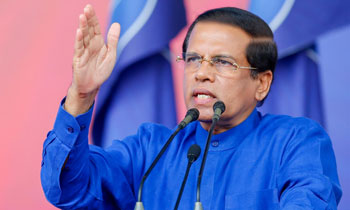 President Maithripala Sirisena said today he would never allow former Army Commander (Rtd) General Jagath Jayasuriya or any other war hero to be hauled before an international criminal court or war tribunal as long as he remained the President of Sri Lanka.

He said the threat of war crimes charges, economic sanctions and the hostile attitude of the global community against Sri Lanka was the direct result of the Mahinda Rajapaksa regime’s failure to create an atmosphere of reconciliation, reconstruction and rehabilitation in a country and a nation which was in tatters after the war.

Addressing a massive gathering of party supporters and well wishers who had converged from all parts of the country to celebrate the SLFP’s 66th anniversary celebrations held at Campbell Park, Borella last afternoon, the President recalled ex-president Rajapaksa’s unilateral decision to declare presidential election two years ahead of time said he wrote to him highlighting six points as to why he should not hold an early election.

“I told him in writing in April 2014 not to hold an early presidential poll for six reasons when such an idea was mooted. The then government had miserably failed to introduce reforms and a proper reconciliation process to build the shattered lives of the people in the North and East. We also had so much of work to complete which the government had failed to do. All constituent party leaders of the UPFA also were of the view that the government must complete its full term before declaring the poll. But he did not listen and went ahead and perished. Mr. Rajapaksa felt he could not face the impending economic melt down, the crisis brewing in the domestic front, the extremely hostile attitude of the global community and UN agencies. The SLFP Central Committee, the Cabinet and the leaders of other political parties of the UPFA were dumb and blind to these developments,”the President said. “Under this highly inhospitable global and domestic environment, what would have been the situation had there been no regime change and I was not elected as the President.”

As the newly elected President, he said he explained how he met world leaders and requested them to give him some space to rebuild the nation, save the country from disaster, introduce reform programmes, restore democracy, the rule of law, media and judicial freedom and put in place a result oriented reconciliation process to which all leaders agreed and promised full support.

“Consequent to the positive and cooperative atmosphere the unity government was able to build up about Sri Lanka among the international community after the January 2015 victory, Sri Lanka was able to regain the GSP+ facility and the EU withdrew the export ban on fish exports. The UNHRC gave Sri Lanka a grace period of two years until September 2019 to address the human rights issues highlighted in the Geneva resolution co-sponsored by Sri Lanka,” he said.

He said the Unity Government had done a lot for the country during the past two years and asked what would have been the position of the SLFP if the UNP went for an election after the 2015 presidential election victory.

“I admit that we have made some lapses and mistakes. But I don’t condone the unfair criticism of the ‘Yahapalana Government’ because we have been able to do much for the country having saved it from a disaster,” the President said.

He said the manner in which some people were using the new and unrestricted freedom was somewhat unusual and the insults, mudslinging, canards and misinformation posted on Facebook, media websites and other electronic and print media against me and against the ‘Yahapalana Government’ was unprecedented.

“The SLFP was formed by the founding father S.W.R.D.Bandaranaike to take the country on a new path. The concept of patriotism, our country, our culture and our nation mindset was first mooted with the establishment of the new party departing from the west-aligned culture that existed since independence,” the President said. “In the short period of three and half years that the SLFP ruled the country from 1956, Mr. Bandaranaike was able to introduce a series of people-friendly programmes amid heavy opposition from rival political parties. He had a new vision and new ideology for the country. There is no leader like Mr. Bandaranaike who was insulted, ridiculed and harassed. He was branded ‘Sevala Banda’ and a spineless leader by his political opponents. Sir John Kotalawela, the Prime Minister before Mr. Bandaranaike said Mr. Bandaranaike let loose the dogs he had caged indicating the socialist and progressive policies he adopted for the nationalization programme and other people friendly projects.”

The President said Mr. Bandaranaike mortgaged his Rosemead Place residence to fund the SLFP and after his assassination in September 1959, Ms. Bandaranaike had to leave the place with her three children as she was not in a position to pay the debt, but Sir John intervened and saved the day for her.

“But this is how out past leaders did politics. They did not come to politics, to get commissions and bribes and embezzle billions like certain other politicians who took to politics as a business. Nepotism was never an issue in the SLFP in the past,” he said.

The President appealed to SLFPers to assist him to rescue their beloved party that had been infected with corruption, nepotism, crimes and waste in the recent past and take the party to victory in 2020 through a clean and robust political campaign.

“Our vision and mission is to create a Sri Lanka free of corruption, waste and nepotism. The SLFP is capable of doing that and our aim is to form a SLFP government in 2020 with those values. I am ready to achieve that target with your support, blessings and cooperation,” he said.