Once a low-slung South Asian port city, the skyline of Colombo is now sprouting new skyscrapers at an almost unbelievable pace.

Around the central business district, the days are full of the sounds of heavy machinery, and the nights ablaze with floodlights and cranes.

In this flurry of activity, several high-profile developments are now reaching their peaks. And, fuelled by foreign investment, many real estate analysts believe only more of these high-rises will come.

But, as this luxury development boom surges, a question remains. Is there enough of a market to sustain these projects?

Look up from almost anywhere in Colombo, and you’ll spot the Lotus Tower. The ruby-coloured ‘bud’ of the tower, which stands on a concrete stalk, is almost complete. Project representatives say, the full spire will be finished by October. When it is, the building will be 350 metres tall – the tallest in South Asia.

It is perhaps the most prominent symbol of foreign investment in the city, funded by the Chinese EXIM Bank for a reported US $104.3 million. The developers claim that once complete, the skyscraper will be visible from India and Bangladesh.

Nearby, the Altair building, Colombo’s so-called “leaning tower of Pisa,” has almost reached its full height. Standing at its base, the design is deceptive: a 63-storyed concrete tower seems to tumble into its 68-storyed neighbour.

The building’s architect, Moshe Safdie, has said, the slanted design is meant to take “maximum advantage of the view, the light, and the sun.”

The base of the building right now is all dirt, kicked up by the trucks going in and out of the property, mixed with the musty smell wafting off Beira Lake. But, when completed, the towers’ myriad balconies will offer views of the Indian Ocean.

Project representatives say, the building should be completed in 2018. It will be the tallest residential building in Colombo, according to its investor materials. Its full height will be 240 metres, and the two towers will house over 400 luxury apartments.

Indocean Developers, which is part of Kolkata-based South City Projects, has poured around US $250 million into the project,according to industry sources.

Across the lake, Shangri-La Hotels and Resorts of Hong Kong is investing US $450 million in two residential towers near Galle Face Green. The company says, the buildings will be 51 storys high, and contain 390 units. They are part of the four-structure hotel, apartment, office, and shopping mall complex that will be called One Galle Face.

Just down the road, the Grand Hyatt Colombo stands tall over the dusty playing fields of S. Thomas’ Prep School. After years of construction delays and financial mismanagement, the nearly 50-storyed hotel aims to be opened by the winter tourist season.

Meanwhile, other major projects are still rising. The Astoria, a 600-unit apartment complex funded by the Aviation Industry Corporation of China, will change the landscape of low-key Kollupitiya.

The US $770 million hotel, residence, mall and office project known as Cinnamon Life, in Slave Island, has suffered delays due to monsoons, but its developers are aiming to finish it by the end of 2019.

This is a city in the midst of a huge transition. Out on the streets, looking up at the skyscrapers, people talk about the “Singapore-ization” of Colombo.

In five years, the city could look completely different. The massive tower of Altair could be dwarfed by an even taller building. The skyline could creep out further, stretching north of the port, and south, to Wellawatte.

But there are cracks in this glass-and-concrete façade.

Fear of a bubble

Even as the supply of luxury apartments and condominiums in Colombo expand, some analysts worry that there will not be enough of a market to fill them.

A 2016 study by the Hongkong and Shanghai Banking Corporation found that 60 percent of the buyers purchasing units in these luxury developments are local speculators looking to make a big return on investment.

Among that number are, “businessmen and deal makers with unexplained wealth purchasing swankier properties in Colombo to profit from the boom,” the report states. Optimism, and leverage, may be causing prices to rise, the authors say, perhaps more than they should be.

Another 25 percent of units are owned by foreign nationals or Sri Lankans living overseas, according to the HSBC. Only 15 percent are purchased by people actually living in the units, which is not ideal for a property market.

But, the study also found that Colombo’s annual rental yields are among the highest in emerging Asia, standing at 6 percent. That’s second only to Jakarta, Indonesia.

An urban planning researcher at the University of Moratuwa, Dr. Chameera de Silva said in an interview , he believes there is enough of a demand to justify these luxury properties.

“Colombo is becoming a metropolis now,” he said. “With that, a lot of opportunities are arising, and the demand for housing is very high.”

What he worries about, he said, is proportional development of more mid-range, affordable housing.

Dr. de Silva said, he believes the only way to sustain the development boom, on all levels, is through better central planning. Government planning agencies like the Urban Development Authority need to invest in rapid transportation, a more efficient electrical grid, and a modern sewer system, he argued.

This next generation of Colombo’s skyscrapers will command amazing views of the sea. They will also look over crumbling apartment blocks and shacks built along the railroad tracks.

Even as unprecedented wealth pours into Sri Lanka’s capital, it remains a city divided.

Whether this development boom will raise up more than just the rich, remains to be seen. 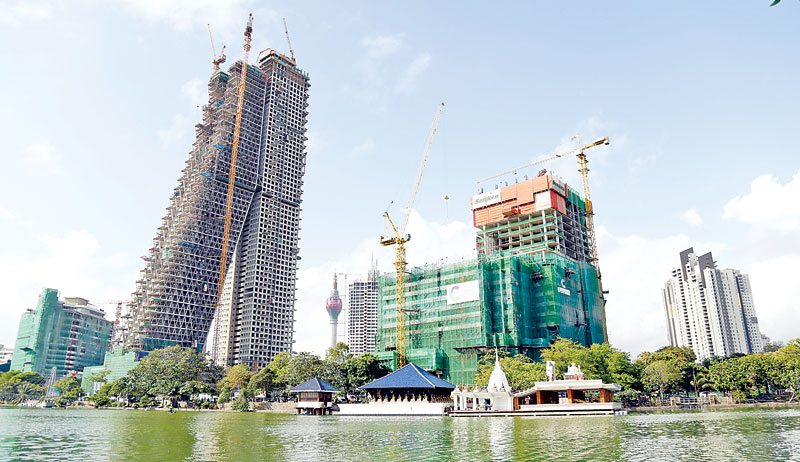