The Hambantota Port will be transformed into a viable venture and churn out revenue to the economy following the new agreement inked with the Chinese company, a top official of the Sri Lanka Ports Authority (SLPA) said.

The port named after former President Mahinda Rajapaksa was built to be a leading services and industrial port in the region. However, it turned out to be a white elephant incurring continuous losses since launching commercial operations in 2011.

SLPA Chairman Dr. Parakrama Dissanayake said as at end of 2016 the cumulative loss of the port was over Rs. 46.7 billion. 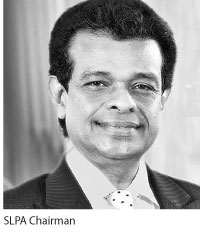 “If we take off the car carriers which was forced to shift from the Port of Colombo to Hambantota, the number of ships handled in 2015 was 19, the following year 14 and from January to June this year 10 which reflects the appalling state of the port,” Dr. Dissanayake said. He said the continuous losses and debt repayment is threatening the survival of SLPA. The port was constructed with an investment of around Rs. 193 billion through commercial loans obtained by the Government. Dr. Dissanayake said that a further investment of around US$ 600 million is required to equip the container terminal and make the Port fully operational.

The annual loan repayment commitment for SLPA is around Rs. 9.1 billion.

Upon receiving the approval of the Cabinet of Ministers a frame work agreement was executed between the secretaries of the Ministry of Ports and Shipping, Ministry of Finance and the Ministry of Development Strategies and International Trade and China Merchant Port Holdings Ltd. (CMPH) on December 8, 2016. The re-structuring of the public-private operations in Hambantota Port is done on a transactional value of US$ 1.4 billion while all immovable and movable properties will be transferred to two Sri Lankan companies such as the Hambantota International Port Services Co. (Pvt) Ltd. (HIPS) and Hambantota International Port Group (Pvt ) Ltd. (HIPG)

The SLPA will hold 50.7 percent while China Merchant Port will hold 49.3 percent stake in HIPS.

SLPA will hold 15 percent and China Merchants Port 85 percent stake in the company.

CMPH has agreed to sell a further 20 percent equity within a period of 10 years to SLPA.

The agreed investment value of the lease is US$ 1.12 billion. SLPA has the right to purchase all the shares upon expiry of 70 years or transfer 76.8 percent stake of HIPS and a share holding of 60 percent in HIPG to SLPA in 80 years at US$ 1.

The term of the concession agreement is 99 years. Dr. Dissanayake said whilst CMPH has agreed to make a royalty payment based on cargo throughput maximum dividends would be payable on profits derived. With regard to the land area, he said despite gazette notifications issued in 2007/2008 of a land area of 1,574 hectares as the port limits, only 1,151 hectares has been identified to be leased out to HIPS and HIPG.

The Minister of Ports and Shipping has the right to appoint a Port Regulator. “An oversight committee convened by the SLPA comprising representatives of Sri Lankan Navy, Sri Lanka Police and the Secretary of the Ministry of Defence will be responsible for managing the security within and outside the port property area,” Dr. Dissanayake said.

With regard to the application of laws the SLPA Chairman said the transaction will be subject to all applicable laws in the country such as Sri Lanka Ports Authority Act, Merchants Shipping Act, Customs Ordinance, Immigration Regulations, License of Shipping Agents and other applicable National Laws and relevant International Treaties and Conventions.

According to the agreement, the government will have the sole power and be the authority over activities involving military personnel, type of activities of military nature whether on land, air or or sea, on shore or offshore within the territory of Sri Lanka.

However, the port lease came under severe criticism from the opposition and in particular the Janatha Vimukthi Peramuna which claims that the southern port, a State asset was being sold out to China with no benefits to the country.

The JVP says that the port was disposed off on a 99-year lease with its services and businesses. It notes that the Chinese company will receive an extra 1,150 hectares of land adjoining the harbor in addition to the 400 acres on which it is located.

The Hambantota Port was built to service ships on the East-West maritime route which is around six to ten nautical south of Hambantota.

Bunkering, ship repair, ship building and crew change facilities were earmarked under the first phase while later phases were aimed at raising the capacity of port to 20 million TEUs per year.

The first phase of the Hambantota port was opened on November 2010 with the berthing of the naval ship, The Jetliner. The cost of constructing the first phase was USD 361 million of which 85 percent was funded by the Exim Bank of China.