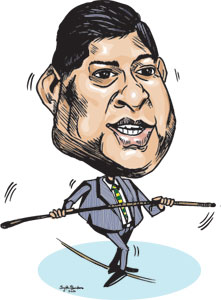 The United National Party (UNP) is likely to take a decision on Foreign Affairs Minister Ravi Karunanayake based on his response to the allegations made against him at the Presidential Commission of Inquiry (PCoI), informed sources said yesterday.

A large number of UNP MPs have sought a meeting with Prime Minister Ranil Wickremesinghe, who is reported to have said the party should wait till Mr. Karunanayake makes his statement at the PCoI today.

Sources said these MPs were of the view that the party should not support the minister, but were agreeable to the Premier’s suggestion.

One of these MPs said it was not fair to take action only against Mr. Karunanayake because several other ministers and MPs from both parties had associated with Perpetual Treasuries Ltd Chairman Arjun Aloysius in the recent past.

“Mr. Aloysius has acted as facilitator for several other ministers and MPs with regard to business deals. Those who are over reacting on the CB bond issue are the ones who have had dealings with him,” he said.