The gunning down of a policeman in Nallur, Jaffna last week evoked an unexpected emotional reaction from the populace of the Northern peninsula together with contradictory statements from the parties concerned. The footage of a high court judge breaking down in tears while apologizing to the slain cop’s wife, moved many to tears while students of the University of Jaffna held a candlelight vigil in honour of the policeman, an occurrence perhaps unheard of in Jaffna’s history. The courts remained shut for several days as lawyers and judges protested against the shooting, with public transport too coming to a halt when private buses stopped operations as a form of protest.

It was perhaps a reaction unimagined by Sergeant Damhewage Sarath Hemachandra when he was alive. Posthumously promoted to the rank of Sub – Inspector, Hemachandra was serving the Jaffna High Court Judge Manikkavasagar Ilancheliyan at the time of his death, while working as a close confidante and security officer of the Judge for 15 years.

Hemachandra was over 300 kilometres away from his family in Kumarakattuwa, Chilaw, when the unfortunate incident occurred on July 22 along the Nallur – Point Pedro Road. Shot by a suspect that has now been identified as 39 year old Selvarasa Jeyanthan by the Police, Hemachandra succumbed to his injuries later that night, leaving his wife Kumudu, and two children, a daughter,16, and a son aged 11.

As his wife remained inconsolable during Hemachandra’s funeral this week, the children looked on dazed, perhaps unable to comprehend that their loving father who checked on them despite where he was stationed, was no more. A man known for his sense of duty to those close to him, the fact that he had spent most of his life away from home since joining the force in November 1986, was unsurprising. Coming from a familial line of military men perhaps the sense of duty he displayed was inculcated in him at a young age. Hemachandra, in a career spanning over 30 years had served around the island in areas such as, Kahatagasdigiliya, Vavuniya, Trincomalee, Wellawatta, Colombo and Kalmunai, while following Judge Ilancheliyan as his security officer for the better part of it which not once took him to a Police station close to home.

It was also perhaps his duty consciousness that led to the unlikely friendship between the Judge and Hemachandra. According to the Judge, Hemachandra not only protected him during his official working hours but also would ensure the safety of the judge while the judge worked at night. “Hemachandra staying at my bungalow would only go to sleep after I am done with my work on most days,” the Judge said, while attending his friend’s funeral. The impact Hemachandra had made through his service was evident with many attached to the judicial and legal services in the North attending his funeral which was held with full Police honours in Kumarakattuwa, on Wednesday.

However, as his family and friends paid their last respects to the hero cop, contradictions have appeared regarding the motive and actual intended target of the shooting. With Judge Ilancheliyan presiding over the controversial Vidya Sivayoganathan rape case, the shooting was thrust into the limelight with many claiming that it was an attempt at the life of the prestigious Judge.

With the Judge himself declaring the shooting as a ‘direct threat to the judiciary’ immediately after the incident, a distraught and emotional Ilancheliyan at Hemachandra’s funeral slammed as he put it, the attempts by the Police spokesman to divert the investigations into the incident.

“He has made an irresponsible comment,” the Judge said referring to the statement made by Police media spokesman SP Ruwan Gunasekara claiming that the Judge was not the intended target of the shooter.

The Spokesman was quoted as saying that the initial investigations have revealed that the shooting that killed Hemachandra and injured another policeman was an unplanned attack.

According to the Police, the shooting incident and the presence of the Judge at the spot had been a coincidence, as opposed to being a pre planned assassination attempt.

According to initial investigations, the incident had happened upon a personal dispute between the suspect and several other individuals along the Nallur – Point Pedro Road in the vicinity of the Nallur Kandaswamy Kovil.

While the dispute had, according to sources, caused traffic congestion in the area, Hemachandra, alighting from his motorcycle had attempted to disperse the crowd and resolve the issue when the main suspect, Selvarasa Jeyanthan had got into an altercation with the cop. Managing to grab the policeman’s service revolver in the ensuing struggle, Jeyanthan shoots him while then turning on the Judge who had also got out of his car at the time. Going on to shoot the other Police officer who was attempting to protect the judge, CCTV footage obtained in the area shows Jeyanthan fleeing on a stolen scooter leaving Ilancheliyan unharmed.

“As the eye witness to the incident, I can say that the Judge was the target,” Ilancheliyan said, adding that if the suspect claims he intended to target a man in Khaki uniform he could have easily shot another policeman in Jaffna as many perform their duties unarmed in the area. “He has no personal enmity with my security officers,” the Judge pointed out, questioning then why else would the man then interfere with his motorcade. Further, according to the Judge, the assailant had pointed the gun directly at him. “He pointed the gun at me clearly intending to shoot when my other security officer pushed me back,” he said. While the Judge added that he has not previously received threats in the post 2009 era, the Police spokesperson should not have made such a statement before the commencement of investigations. When questioned regarding the accusations, SP Gunasekara said he is unable to make any further comments as a magisterial inquiry has begun.

Meanwhile however, the main suspect Selvarasa continues to maintain that he had no intention in killing the Judge, but instead, merely wanted to settle a score with a three wheel driver at the stand where the incident occurred. According to him, the incident had occurred due to a dispute between his brother and a three wheel driver. “I interfered and ended up in a scuffle with one of the trishaw drivers at the Nallur three wheel park,” his statement to the Police read.

Police say, Jeyanthan claims that the deceased police sergeant had intervened and tried to settle the issue,which led to a heated argument with the Police Sergeant, and he had grappled with him, grabbed his pistol and shot at him hitting his abdomen, causing fatal injuries. According to Jeyanthan he was highly intoxicated at the time and one of the other suspects had egged him on to shoot the approaching cop. He also maintained that he was a former LTTE cadre who has remained unrehabilitated. However, contradicting his claims, Jeyanthan’s wife says, her husband was never an LTTE cadre. According to her, the shooting was unintentional and in fact was an accident. She also claims that the Police are issuing incorrect statements regarding her husband.

As contrasting statements are being made, Judge Ilancheliyan says, the statement made by an accused should not be the focus. “Confessions are inadmissible in courts,” he said, adding that an accused will say anything to protect himself.

According to Judge Ilancheliyan, the target of the shooting is not of importance anymore. “A man was killed and the suspect attempted to kill two others including myself,” the Judge said, adding that investigations into the incident should not be interfered with.

While saying that the investigation should not be diverted in any manner, Judge Ilancheliyan says, justice should be allowed to prevail. 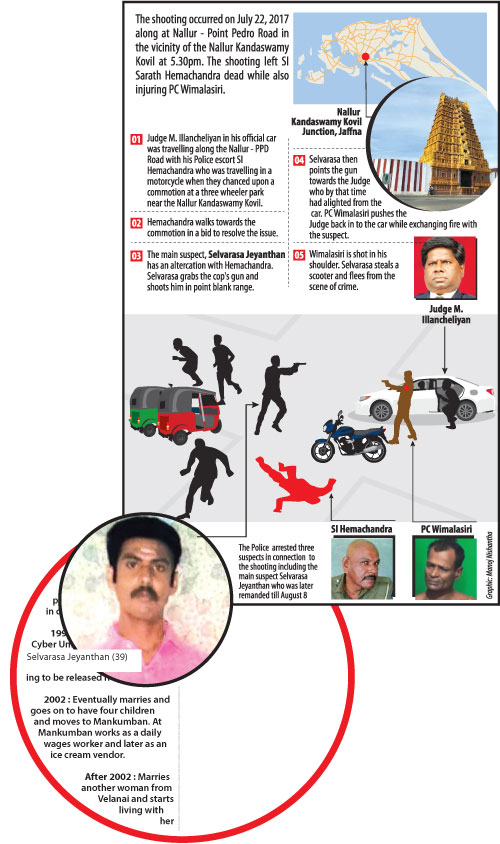