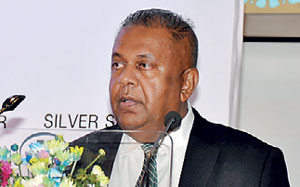 Samaraweera said the way forward for Sri Lanka would be to attract export-oriented Foreign Direct Investments (FDIs) that connect local value chains to global value chains, which he believes would be the foundation for trade and economic diversification over the medium term.
“Building on that, the economy could gradually enhance its technical capabilities, enabling Sri Lanka to enter into global value chains crating opportunities across the entire economy,” he added.

He emphasised that for an economy like Sri Lanka, it was important to tap into external sources of demand through trade and FDIs to attain sustained GDP growth levels of 7% and above.

Furthermore he said the Inland Revenue Department was in the first year of RAMISimplementation, aimed at increasing automation and enhancing the efficiency of tax administration.In addition, it was pointed that they were in the final stage of implementation of Integrated Treasury Management Information System (ITMS) to facilitate robust Government payment systems.

“We are already seeing the results of the measures implemented so far. For instance in 2016, Government revenue increased to 14.2% of GDP, a notable improvement from 11.5% of GDP in 2014. The fiscal deficit has been curtailed to 5.4% of GDP in 2016,” the Minister said.

He went on to say that the Government has recognised that historically, shortcomings in policy stability have been an important factor in FDI weakness.

“A key commitment of the Government’s fiscal policy is to provide a stable policy regime with simpler, clear and more transparent tax policy that provides investments with a clear understanding of the policy space they [investors] operate in,” he added.

The Minister also suggested new ways of driving investments, including minimising the upfront cost of investment and introducing innovative schemes like accelerated depreciation, which will better target the actual investment outlays.

According to him such FDIs not only boost investment necessary for growth through new technology and access to markets, but also provide crucial ‘non-debt’ creating balance of payment (BOP) financing.

Samaraweera stressed that they were continuing the modernisation of trade policies by rationalisation of tariff and non-tariff barriers to trade, with a view to reduce the complexity of taxation and enhancing the Ease of Doing Business.

“Gradually as we shift towards a 60-40 ratio of direct to indirect taxes, we can reduce our reliance on taxes collected at the border, enabling more outward-orientation of the economy,” he added. It was pointed that in 2016, the foregone taxes arising from tax incentives and preferential rates amounted to around $1.4 billion or 1.6% of GDP, well above the annual FDIs received. “In the past Sri Lanka has relied on open-ended tax incentives, which have resulted in large fiscal losses with limited translation into real FDI growth,” Samaraweera pointed out.

He claimed it was one of the factors that led to weakness in generation of direct taxes and resulted in 80% of taxes being collected in the form of regressive indirect taxes, which resulted in an uneven burden on the poor.

Sri Lanka needs to update commercial laws and procedures to enhance its investment climate, he said, noting that identifying and implementing the legislative reforms in subordinate legislation was a major priority of the Government.

The Minister said of key relevance to trade and investment would be the Foreign Exchange Management Bill and the Customs Act, which were important areas for reforms.

While assuring that the Government would continue to mobilise investments in logistics and transport infrastructure, especially on seaports and airports to support trade and investment, he recalled that most of infrastructure investments funded by external borrowings had been directed towards non-tradable sectors, which created foreign currency liabilities without the necessary foreign exchange inflows.

Noting that investment in human capital was more important than physical infrastructure to drive competition in an export-led economy, Samaraweera assured further resources would be allocated towards strengthening education, training and research capabilities in the country.