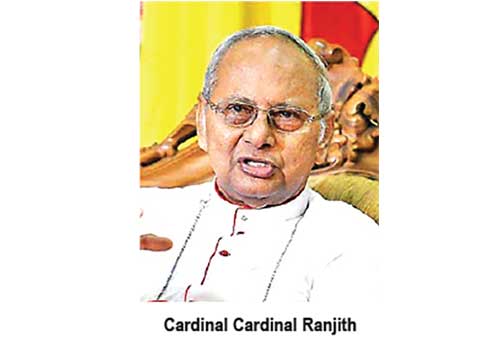 Archbishop of Colombo Cardinal Malcolm Ranjith yesterday urged all religious leaders including the Maha Sanga to take the lead in preventing night life activities which have been proposed and thereby safeguard Sri Lanka’s culture.

Cardinal Ranjith who was speaking during a public gathering in Kurana Negombo , Sri Lanka’s culture which is nurtured by Buddhism should not be allowed to be destroyed by night life activities.

“ Some ‘parangiyas’ who have come to Sri Lanka after being abroad have proposed night life activities. They propose the growing cannabis. All these things are being done while making an effort to make Sri Lanka free of drugs. They speak of sentencing those who are found guilty of drug related offences to death. These and other night life activities will destroy our culture which is based on the Buddhist philosophy. Therefore we urge religious leaders , particularly the Buddhist monks to take the lead in safeguarding our rich culture,” he said.

“We also see handing over lands to various foreign companies. We would like to remind the political leaders not to use this nation just for power and positions,” he added.

“ What Sri Lanka needs is a philosophical revolution,” he said